The Influence of Democracy Aid on the Arab Spring Protests: Did Western Democracy Assistance Help Nations Respond Positively to the Protests? 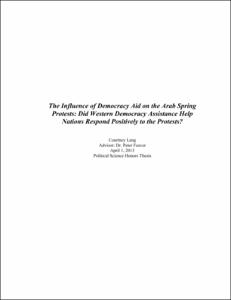 View / Download
622.0 Kb
Date
Author
Lang, Courtney
Repository Usage Stats
318
views
755
downloads
Abstract
The unprecedented Arab Spring crisis that erupted in late 2010 and spread rapidly across the Middle East and North Africa is history in the making. As the Arab Spring progresses, it has become clear that some nations have been more successful than others in their responses to the crisis, although the reasoning for this is yet to be determined. This thesis suggests that Western foreign aid influenced the way in which these nations responded to the crisis, particularly in regards to their transition to a more legitimate democracy. More specifically, this thesis hypothesizes that those nations that received a significant amount of Western assistance responded more successfully than those that received little. The results gathered from the case study analysis conducted in the paper support this hypothesis. These findings reinforce the literature that argues that foreign aid is effective, and as such, open the door for further research into the ways in which Western foreign aid can be utilized in the future.
Type
Honors thesis
Department
Political Science
Subject
Arab Spring
Democracy Assistance
Foreign Aid
Middle East
MENA
Permalink
https://hdl.handle.net/10161/7763
Citation
Lang, Courtney (2013). The Influence of Democracy Aid on the Arab Spring Protests: Did Western Democracy Assistance Help Nations Respond Positively to the Protests?. Honors thesis, Duke University. Retrieved from https://hdl.handle.net/10161/7763.
Collections
More Info
Show full item record