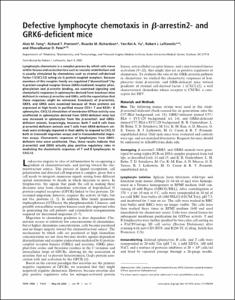 Associate Consulting Professor in the Department of Medicine
The overall goals of the Patel laboratory are two-fold: 1) to define the mechanisms of inflammation, focusing on signaling through G protein coupled receptors, for the purpose of identifying novel therapeutic targets for immunologic diseases; and 2) to define the role that T cell education in the thymus plays in diseases of disordered immunity such as autoimmune diseases and primary immunodeficiency syndromes. 1. Roles of Membrane-Tethered Chemokines in Inflammation. Based on o Associate Professor in Medicine
Critical physiological events throughout the body are controlled by extracellular signals from neurotransmitters and hormones acting on cell surface receptors. Receptors transduce these signals to alter intracellular metabolism and cellular responsiveness through heterotrimeric G protein/second messenger pathways or through small GTP-binding protein/protein kinase cascades. The mechanisms that control the responsiveness of target organ G protein-coupled receptors include receptor ph Adjunct Assistant Professor in the Department of Medicine
Alphabetical list of authors with Scholars@Duke profiles.