Involvement of tyrosine residues located in the carboxyl tail of the human beta 2-adrenergic receptor in agonist-induced down-regulation of the receptor. 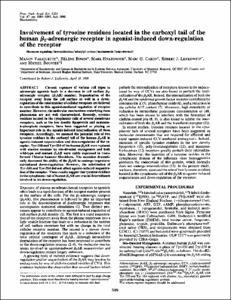 View / Download
1.0 Mb
Date
Authors
Valiquette, M
Bonin, H
Hnatowich, M
Caron, MG
Lefkowitz, RJ
Bouvier, M
Repository Usage Stats
220
views
135
downloads
Abstract
Chronic exposure of various cell types to adrenergic agonists leads to a decrease in cell surface beta 2-adrenergic receptor (beta 2AR) number. Sequestration of the receptor away from the cell surface as well as a down-regulation of the total number of cellular receptors are believed to contribute to this agonist-mediated regulation of receptor number. However, the molecular mechanisms underlying these phenomena are not well characterized. Recently, tyrosine residues located in the cytoplasmic tails of several membrane receptors, such as the low density lipoprotein and mannose-6-phosphate receptors, have been suggested as playing an important role in the agonist-induced internalization of these receptors. Accordingly, we assessed the potential role of two tyrosine residues in the carboxyl tail of the human beta 2AR in agonist-induced sequestration and down-regulation of the receptor. Tyr-350 and Tyr-354 of the human beta 2AR were replaced with alanine residues by site-directed mutagenesis and both wild-type and mutant beta 2AR were stably expressed in transformed Chinese hamster fibroblasts. The mutation dramatically decreased the ability of the beta 2AR to undergo isoproterenol-induced down-regulation. However, the substitution of Tyr-350 and Tyr-354 did not affect agonist-induced sequestration of the receptor. These results suggest that tyrosine residues in the cytoplasmic tail of human beta 2AR are crucial determinants involved in its down-regulation.
Type
Journal article
Subject
Adenylyl Cyclases
Amino Acid Sequence
Animals
Cell Membrane
Colforsin
Down-Regulation
Humans
Isoproterenol
Kinetics
Molecular Sequence Data
Mutation
Protein Conformation
Receptors, Adrenergic, beta
Restriction Mapping
Transfection
Tyrosine
Permalink
https://hdl.handle.net/10161/7863
Collections
More Info
Show full item record