Regions of the alpha 1-adrenergic receptor involved in coupling to phosphatidylinositol hydrolysis and enhanced sensitivity of biological function. 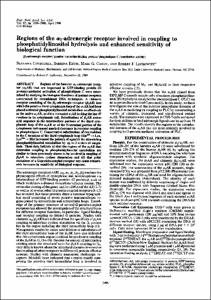 View / Download
1.3 Mb
Date
Authors
Cotecchia, S
Exum, S
Caron, MG
Lefkowitz, RJ
Repository Usage Stats
190
views
135
downloads
Abstract
Regions of the hamster alpha 1-adrenergic receptor (alpha 1 AR) that are important in GTP-binding protein (G protein)-mediated activation of phospholipase C were determined by studying the biological functions of mutant receptors constructed by recombinant DNA techniques. A chimeric receptor consisting of the beta 2-adrenergic receptor (beta 2AR) into which the putative third cytoplasmic loop of the alpha 1AR had been placed activated phosphatidylinositol metabolism as effectively as the native alpha 1AR, as did a truncated alpha 1AR lacking the last 47 residues in its cytoplasmic tail. Substitutions of beta 2AR amino acid sequence in the intermediate portions of the third cytoplasmic loop of the alpha 1AR or at the N-terminal portion of the cytoplasmic tail caused marked decreases in receptor coupling to phospholipase C. Conservative substitutions of two residues in the C terminus of the third cytoplasmic loop (Ala293----Leu, Lys290----His) increased the potency of agonists for stimulating phosphatidylinositol metabolism by up to 2 orders of magnitude. These data indicate (i) that the regions of the alpha 1AR that determine coupling to phosphatidylinositol metabolism are similar to those previously shown to be involved in coupling of beta 2AR to adenylate cyclase stimulation and (ii) that point mutations of a G-protein-coupled receptor can cause remarkable increases in sensitivity of biological response.
Type
Journal article
Subject
Amino Acid Sequence
Animals
Cell Line
Cricetinae
Hydrolysis
Inositol
Inositol Phosphates
Kinetics
Ligands
Molecular Sequence Data
Norepinephrine
Phosphatidylinositols
Plasmids
Protein Conformation
Receptors, Adrenergic, alpha
Permalink
https://hdl.handle.net/10161/7864
Collections
More Info
Show full item record