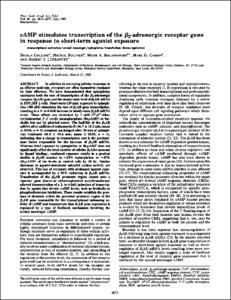 View / Download
1.2 Mb
Date
Authors
Collins, S
Bouvier, M
Bolanowski, MA
Caron, MG
Lefkowitz, RJ
Repository Usage Stats
248
views
162
downloads
Abstract
In addition to conveying cellular responses to an effector molecule, receptors are often themselves regulated by their effectors. We have demonstrated that epinephrine modulates both the rate of transcription of the beta 2-adrenergic receptor (beta 2AR) gene and the steady-state level of beta 2AR mRNA in DDT1MF-2 cells. Short-term (30 min) exposure to epinephrine (100 nM) stimulates the rate of beta 2AR gene transcription, resulting in a 3- to 4-fold increase in steady-state beta 2AR mRNA levels. These effects are mimicked by 1 mM N6,O2'-dibutyryladenosine 3',5'-cyclic monophosphate (Bt2cAMP) or foskolin but not by phorbol esters. The half-life of the beta 2AR mRNA after addition of actinomycin D (46.7 +/- 10.2 min; mean +/- SEM; n = 5) remained unchanged after 30 min of epinephrine treatment (46.8 +/- 10.6 min; mean +/- SEM; n = 4), indicating that a change in transcription rate is the predominant factor responsible for the increase of beta 2AR mRNA. Whereas brief exposure to epinephrine or Bt2cAMP does not significantly affect the total number of cellular beta 2ARs (assessed by ligand binding), continued exposure results in a gradual decline in beta 2AR number to approximately 20% (epinephrine) or approximately 45% (Bt2cAMP) of the levels in control cells by 24 hr. Similar decreases in agonist-stimulated adenylyl cyclase activity are observed. This loss of receptors with prolonged agonist exposure is accompanied by a 50% reduction in beta 2AR mRNA. Transfection of the beta 2AR promoter region cloned onto a reporter gene (bacterial chloramphenicol acetyltransferase) allowed demonstration of a 2- to 4-fold induction of transcription by agents that elevate cAMP levels, such as forskolin or phosphodiesterase inhibitors. These results establish the presence of elements within the proximal promoter region of the beta 2AR gene responsible for the transcriptional enhancing activity of cAMP and demonstrate that beta 2AR gene expression is regulated by a type of feedback mechanism involving the second messenger cAMP.
Type
Journal article
Subject
1-Methyl-3-isobutylxanthine
Animals
Base Sequence
Cell Line
Cell Membrane
Colforsin
Cricetinae
Cyclic AMP
Epinephrine
Genes
Glioma
Kinetics
RNA, Messenger
Rats
Receptors, Adrenergic, beta
Tetradecanoylphorbol Acetate
Theophylline
Transcription, Genetic
Permalink
https://hdl.handle.net/10161/7867
Collections
More Info
Show full item record