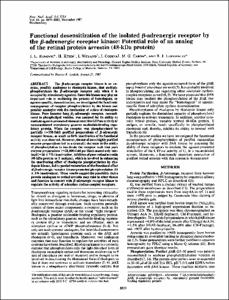 View / Download
854.3 Kb
Date
Authors
Benovic, JL
Kühn, H
Weyand, I
Codina, J
Caron, MG
Lefkowitz, RJ
Repository Usage Stats
222
views
143
downloads
Abstract
The beta-adrenergic receptor kinase is an enzyme, possibly analogous to rhodopsin kinase, that multiply phosphorylates the beta-adrenergic receptor only when it is occupied by stimulatory agonists. Since this kinase may play an important role in mediating the process of homologous, or agonist-specific, desensitization, we investigated the functional consequences of receptor phosphorylation by the kinase and possible analogies with the mechanism of action of rhodopsin kinase. Pure hamster lung beta 2-adrenergic receptor, reconstituted in phospholipid vesicles, was assessed for its ability to mediate agonist-promoted stimulation of the GTPase activity of coreconstituted stimulatory guanine nucleotide-binding regulatory protein. When the receptor was phosphorylated by partially (approximately 350-fold) purified preparations of beta-adrenergic receptor kinase, as much as 80% inactivation of its functional activity was observed. However, the use of more highly purified enzyme preparations led to a dramatic decrease in the ability of phosphorylation to inactivate the receptor such that pure enzyme preparations (approximately 20,000-fold purified) caused only minimal (approximately 1off/- 7%) inactivation. Addition of pure retinal arrestin (48-kDa protein or S antigen), which is involved in enhancing the inactivating effect of rhodopsin phosphorylation by rhodopsin kinase, led to partial restoration of the functional effect of beta-adrenergic receptor kinase-promoted phosphorylation (41 +/- 3% inactivation). These results suggest the possibility that a protein analogous to retinal arrestin may exist in other tissues and function in concert with beta-adrenergic receptor kinase to regulate the activity of adenylate cyclase-coupled receptors.
Type
Journal article
Subject
Animals
Antigens
Arrestin
Cyclic AMP-Dependent Protein Kinases
Eye Proteins
GTP-Binding Proteins
Humans
In Vitro Techniques
Phosphoproteins
Phosphorylation
Protein Kinases
Receptors, Adrenergic, beta
Retina
beta-Adrenergic Receptor Kinases
Permalink
https://hdl.handle.net/10161/7874
Collections
More Info
Show full item record