Beta-agonist- and prostaglandin E1-induced translocation of the beta-adrenergic receptor kinase: evidence that the kinase may act on multiple adenylate cyclase-coupled receptors. 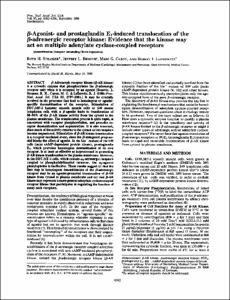 View / Download
1.1 Mb
Date
Authors
Strasser, RH
Benovic, JL
Caron, MG
Lefkowitz, RJ
Repository Usage Stats
465
views
137
downloads
Abstract
beta-Adrenergic receptor kinase (beta-AR kinase) is a cytosolic enzyme that phosphorylates the beta-adrenergic receptor only when it is occupied by an agonist [Benovic, J. Strasser, R. H., Caron, M. G. & Lefkowitz, R. J. (1986) Proc. Natl. Acad. Sci. USA 83, 2797-2801.] It may be crucially involved in the processes that lead to homologous or agonist-specific desensitization of the receptor. Stimulation of DDT1MF-2 hamster smooth muscle cells or S49 mouse lymphoma cells with a beta-agonist leads to translocation of 80-90% of the beta-AR kinase activity from the cytosol to the plasma membrane. The translocation process is quite rapid, is concurrent with receptor phosphorylation, and precedes receptor desensitization and sequestration. It is also transient, since much of the activity returns to the cytosol as the receptors become sequestered. Stimulation of beta-AR kinase translocation is a receptor-mediated event, since the beta-antagonist propranolol blocks the effect of agonist. In the kin- mutant of the S49 cells (lacks cAMP-dependent protein kinase), prostaglandin E1, which provokes homologous desensitization of its own receptor, is at least as effective as isoproterenol in promoting beta-AR kinase translocation to the plasma membrane. However, in the DDT1MF-2 cells, which contain alpha 1-adrenergic receptors coupled to phosphatidylinositol turnover, the alpha 1-agonist phenylephrine is ineffective. These results suggest that the first step in homologous desensitization of the beta-adrenergic receptor may be an agonist-promoted translocation of beta-AR kinase from cytosol to plasma membrane and that beta-AR kinase may represent a more general adenylate cyclase-coupled receptor kinase that participates in regulating the function of many such receptors.
Type
Journal article
Subject
Alprostadil
Animals
Cell Compartmentation
Cell Line
Cell Membrane
Cytosol
Isoproterenol
Mice
Phosphorylation
Protein Kinases
Receptors, Adrenergic, beta
Permalink
https://hdl.handle.net/10161/7878
Collections
More Info
Show full item record