Beta-adrenergic receptor kinase: identification of a novel protein kinase that phosphorylates the agonist-occupied form of the receptor. 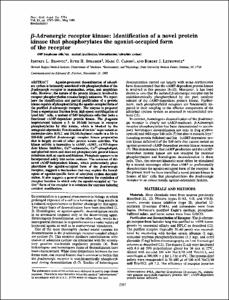 View / Download
1.2 Mb
Date
Authors
Benovic, JL
Strasser, RH
Caron, MG
Lefkowitz, RJ
Repository Usage Stats
229
views
167
downloads
Abstract
Agonist-promoted desensitization of adenylate cyclase is intimately associated with phosphorylation of the beta-adrenergic receptor in mammalian, avian, and amphibian cells. However, the nature of the protein kinase(s) involved in receptor phosphorylation remains largely unknown. We report here the identification and partial purification of a protein kinase capable of phosphorylating the agonist-occupied form of the purified beta-adrenergic receptor. The enzyme is prepared from a supernatant fraction from high-speed centrifugation of lysed kin- cells, a mutant of S49 lymphoma cells that lacks a functional cAMP-dependent protein kinase. The beta-agonist isoproterenol induces a 5- to 10-fold increase in receptor phosphorylation by this kinase, which is blocked by the antagonist alprenolol. Fractionation of the kin- supernatant on molecular-sieve HPLC and DEAE-Sephacel results in a 50- to 100-fold purified beta-adrenergic receptor kinase preparation that is largely devoid of other protein kinase activities. The kinase activity is insensitive to cAMP, cGMP, cAMP-dependent kinase inhibitor, Ca2+-calmodulin, Ca2+-phospholipid, and phorbol esters and does not phosphorylate general kinase substrates such as casein and histones. Phosphate appears to be incorporated solely into serine residues. The existence of this novel cAMP-independent kinase, which preferentially phosphorylates the agonist-occupied form of the beta-adrenergic receptor, suggests a mechanism that may explain the homologous or agonist-specific form of adenylate cyclase desensitization. It also suggests a general mechanism for regulation of receptor function in which only the agonist-occupied or "active" form of the receptor is a substrate for enzymes inducing covalent modification.
Type
Journal article
Subject
Adrenergic beta-Agonists
Animals
Cricetinae
Eye Proteins
G-Protein-Coupled Receptor Kinase 1
Lymphoma
Phosphorylation
Protein Kinases
Receptors, Adrenergic, beta
Time Factors
Permalink
https://hdl.handle.net/10161/7879
Collections
More Info
Show full item record