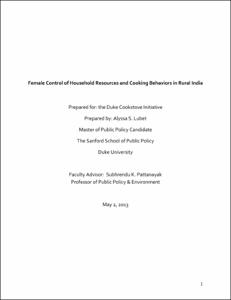 View / Download
446.2 Kb
Date
Author
Lubet, Alyssa
Advisor
Pattanayak, Subhrendu K
Repository Usage Stats
268
views
1,312
downloads
Abstract
Indoor air pollution due to traditional biomass-burning stoves poses a major respiratory health risk in the developing world. Children, in particular, disproportionately bear the burden of disease caused by this problem. One way to directly address this issue is through increasing access to “cleaner” cooking technology, whether in the form of “improved” biomass-burning cookstoves that reduce exposure to emissions, or in the use of cleaner, non-biomass fuels such as liquid petroleum gas. Existing research suggests that when women in less-developed countries enjoy more “bargaining power”—control over household resources—outcomes favorable to women and children are more likely. I attempt to determine whether this conclusion can also be applied to cooking behaviors, using a data set drawn from approximately 2,000 household-level surveys in the Indian states of Uttarakhand and Uttar Pradesh. I use linear regression to estimate the effect on use of such fuels of four factors that could conceivably proxy for women’s control over household resources: relative ages of a husband and wife, husbands’ and wives’ relative years of education, female household headship, and whether or not a wife engages in an income-generating occupation outside of housework. My results show a clear positive correlation between both wives’ and husbands’ years of education and improved stove ownership; when regressed together, however, wives’ years of education are correlated with improved stove ownership by a greater magnitude than their husbands’ years of education. This suggests that education may have a stronger effect on women’s preferences for improved cooking technology and/or their ability to exercise these preferences. In contrast, age, female headship, and wives’ income generation did not show a significant correlation with improved stove ownership, and had ambiguous correlations with related outcomes, such as time spent cooking and preparing fuel. This indicates a need for more qualitative and narrative studies in this field, as well as more direct empirical inquiries into gendered preferences, to better understand these relationships and their effect on indoor air pollution.
Type
Master's project
Department
The Sanford School of Public Policy
Permalink
https://hdl.handle.net/10161/7929
Citation
Lubet, Alyssa (2013). Female Control of Household Resources and Cooking Behaviors in Rural India. Master's project, Duke University. Retrieved from https://hdl.handle.net/10161/7929.
Collections
More Info
Show full item record