(Re)mapping the Borderlands of Blackness: Afro-Mexican Consciousness and the Politics of Culture 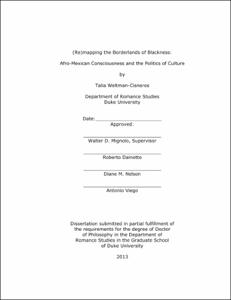 The dominant cartography of post-Revolutionary Mexico has relied upon strategic constructions of a unified and homogenized national and cultural consciousness (mexicanidad), in order to invent and map a coherent image of imagined community. These strategic boundaries of mexicanidad have also relied upon the mapping of specific codes of being and belonging onto the Mexican geo-body. I argue that these codes have been intimately linked to the discourse of mestizaje, which, in its articulation and operation, has been fashioned as a cosmic tool with which to dissolve and solve the ethno-racial and social divisions following the Revolution, and to usher a unified mestizo nation onto a trajectory towards modernity.

However, despite its rhetoric of salvation and seemingly race-less/positivistic articulation, the discourse of mestizaje has propagated an uneven configuration of mexicanidad in which the belonging of certain elements have been coded as inferior, primitive, problematic, and invisible. More precisely, in the case of Mexicans of African descent, this segment of the population has also been silenced and dis-placed from this dominant cartography.

This dissertation examines the coding of blackness and its relationship with mexicanidad in specific sites and spaces of knowledge production and cultural production in the contemporary era. I first present an analysis of this production immediately in the period following the Revolution, especially from the 1930's to the 1950's, a period labeled as the "cultural phase of the Mexican Revolution." This time period was strategic in manufacturing and disseminating a precise politics of culture that was used to reflect this dominant configuration and cartography of mexicanidad. That is, the knowledge and culture produced during this time imbedded and displayed codes of being and belonging, which resonated State projects and narratives that were used to define and secure the boundaries of a unified, mestizo imaginary of mexicanidad. And, it is within this context that I suggest that blackness has been framed as invisible, problematic, and foreign. For example, cultural texts such as film and comics have served as sites that have facilitated the production and reflection of this uneasy relationship between blackness and mexicanidad. Moreover, this strained and estranged relationship has been further sustained by the nationalization and institutionalization of knowledge and culture related to the black presence and history in Mexico. From the foundational text La raza cósmica, written in 1925 by José Vasconcelos, to highly influential corpuses produced by Mexican anthropologists during this post-Revolutionary period, the production of knowledge and the production of culture have been intimately tied together within an uneven structure of power that has formalized racialized frames of reference and operated on a logic of coloniality. As a result, today it is common to be met with the notion that "no hay negros en México (there are no blacks in Mexico).

Yet, on the contrary, contemporary Afro-Mexican artists and community organizations within the Costa Chica region have been engaging a different cultural politics that has been serving as a tool of place-making and as a decolonization of codes of being and belonging. In this regard, I present an analysis of contemporary Afro-Mexican cultural production, specifically visual arts and radio, that present a counter-cartography of the relationship between blackness and mexicanidad. More specifically, in their engagement of the discourse of cimarronaje (maroonage), I propose that these sites of cultural production also challenge, re-think, re-imagine, and re-configure this relationship. I also suggest that this is an alternative discourse of cimarronaje that functions as a decolonial project in terms of the reification and re-articulation of afromexicanidad (Afro-Mexican-ness) as a dynamic and pluri-versal construction of being and belonging. And, thus, in their link to community programs and social action initiatives, this contemporary cultural production also strives to combat the historical silence, dis-placement, and discrimination of the Afro-Mexican presence in and contributions to the nation. In turn, this dissertation offers an intervention in the making of and the relationships between race, space and place, and presents an interrogation of the geo-politics and bio-politics of being and belonging in contemporary Mexico.