Freedom Under the Law: Milton, the Virtues, and Revolution in the Seventeenth-Century 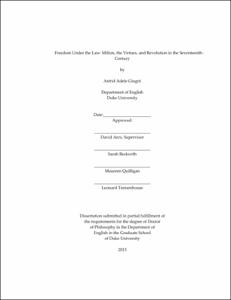 John Milton argued that customs are antithetical to rational judgment. My dissertation, Freedom Under the Law, investigates the conception of rationality that underlies the divorce of tradition and reason in the writings of the English Civil Wars and Interregnum (1642-1660). In this period, republican authors strive to turn English subjects into citizens whose active virtue and rational judgment is unclouded by tradition and habits. This dissertation argues that these writers build their arguments on a paradoxical depiction of the people as both rationally capable of consenting to political association and irrationally bound by custom. In conversation with Alasdair MacIntyre's analysis of the Aristotelian tradition, Freedom Under the Law exposes the tensions that arise in the writings of both canonical and non-canonical seventeenth-century authors as they attempt to re-imagine and represent the individual, the family, and the commonwealth. As this project demonstrates, writers ranging from John Milton to the millenarian John Rogers to the Parliamentarian Henry Parker reveal a residual understanding of political and social community that owes its vocabulary to medieval and classical modes of thinking. However, while Aristotelian models of political association closely link reason, habit, and justice, the authors considered in my project present an understanding of individuals as capable of rational action independent of tradition and custom.

This dissertation traces how this revolutionary account of the individual in political association is expressed through a range of often-conflicting formulations of the English nation. Freedom Under the Law begins with Milton's representation of education in the virtues in his early theatrical piece, Comus (1634). This first chapter establishes the guiding question of the project: how is the relationship between individual and community reconfigured in the literature of the seventeenth-century? In chapters two and three, I situate Milton's domestic and political prose of 1643-49 in the context of Puritan marriage manuals and Parliamentarian and royalist tracts. Through these comparisons, I show that Milton's distrust of customary laws produces a representation of the virtuous individual and the ideal nation as independent of their own history and, ironically, driven to constant iconoclastic self-reformation. Chapter four demonstrates how impoverished accounts of natural law lead to a devaluing of the people's legislative authority in Edward Sexby's call for the killing of Oliver Cromwell in Killing No Murder (1657), apologias of the Cromwellian dissolution of the Parliament in 1653, and the Putney Debates in 1647. Chapter five considers Milton's Readie and Easie Way (1660) alongside Fifth Monarchist pamphlets. This chapter questions J.G.A. Pocock's distinction between a medieval custom-based juristic tradition and a republican understanding of rational political life, a distinction adopted widely in Milton studies. I argue that comparison with Aquinas's Aristotelian account of custom and law brings into relief tensions in Milton's model of rational political participation. Throughout the dissertation, I argue that the conception of virtue and reason adopted by Milton and his contemporaries allows them to dismiss historically-bound embodiments of justice and reason as enslaving accretions.