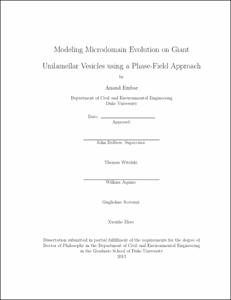 The surface of cell membranes can display a high degree of lateral heterogeneity. This non-uniform distribution of constituents is characterized by mobile nanodomain clusters called rafts. Enriched by saturated phospholipids, cholesterol and proteins, rafts are considered to be vital for several important cellular functions such as signalling and trafficking, morphological transformations associated with exocytosis and endocytosis and even as sites for the replication of viruses. Understanding the evolving distribution of these domains can provide significant insight into the regulation of cell function. Giant vesicles are simple prototypes of cell membranes. Microdomains on vesicles can be considered as simple analogues of rafts on cell membranes and offer a means to study various features of cellular processes in isolation.

In this work, we employ a continuum approach to model the evolution of microdomains on the surface of Giant Unilamellar Vesicles (GUVs). The interplay of species transport on the vesicle surface and the mechanics of vesicle shape change is captured using a chemo-mechanical model. Specifically, the approach focuses on the regime of vesicle dynamics where shape change occurs on a much faster time scale in comparison to species transport, as has been observed in several experimental studies on GUVs. In this study, shape changes are assumed to be instantaneous, while species transport, which is modeled by phase separation and domain coarsening, follows a natural time scale described by the Cahn--Hilliard dynamics.

The curvature energy of the vesicle membrane is defined by the classical Canham--Helfrich--Evans model. Dependence of flexural rigidity and spontaneous curvature on the lipid species is built into the energy functional. The chemical energy is characterized by a Cahn--Hilliard type density function that intrinsically captures the line energy of interfaces between two phases. Both curvature and chemical contributions to the vesicle energetics are consistently non-dimensionalized.

The coupled model is cast in a diffuse-interface form using the phase-field framework. The phase-field form of the governing equations describing shape equilibrium and species transport are both fourth-order and nonlinear. The system of equations is discretized using the finite element method with a uniform cubic-spline basis that satisfies global higher-order continuity. For shape equilibrium, geometric constraints of constant internal volume and constant surface area of the vesicle are imposed weakly using the penalty approach. A time-stepping scheme based on the unconditionally gradient-stable convexity-splitting technique is employed for explicit time integration of nonlocal integrals arising from the geometric constraints.

Numerical examples of axisymmetric stationary shapes of uniform vesicles are presented. Further, two- and three-dimensional numerical examples of domain formation and growth coupled to vesicle shape changes are discussed. Simulations qualitatively depicting curvature-dependent domain sorting and shape changes to minimize line tension are presented. The effect of capturing the difference in time scales is also brought out in a few numerical simulations that predict a starkly different pathway to equilibrium.