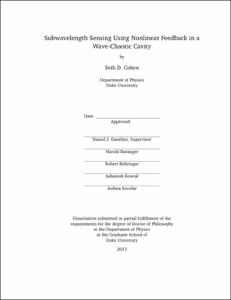 Typical imaging systems rely on the interactions of matter with electromagnetic radiation, which can lead to scattered waves that are radiated away from the imaging area. The goal such an imaging device is to collect these radiated waves and focus them onto a measurement detector that is sensitive to the wave's properties such as wavelength (or color) and intensity. The detector's measurements of the scattered fields are then used to reconstruct spatial information about the original matter such as its shape or location. However, when a scattered wave is collected by the imaging device, it diffracts and inteferes with itself. The resulting interference pattern can blur spatial information of the reconstructed image. This leads to a so-called diffraction limit, which describes the minimum sizes of spatial features on a scatterer that can be resolved using conventional imaging techniques. The diffraction limit scales with the wavelength &lambda; of the illuminating field, where the limit for conventional imaging with visible light is approximately 200 nm. Investigating subwavelength objects (< &lambda;) requires more advanced measurement techniques, and improving the resolving capabilities of imaging devices continues to be an active area of research.

Here, I describe a new sensing technique for resolving the position of a subwavelength scatterer (< &lambda;) with vastly subwavelength resolution (<< &lambda;). My approach combines two separate fields of scientific inquiry: time-delayed nonlinear feedback and wave chaos. In typical time-delayed nonlinear feedback systems, the output of a nonlinear device is delayed and fed back to its input. In my experiment, the output of a radio-frequency (&lambda; ~ 15 cm) nonlinear circuit is injected into a complex scattering environment known as a wave-chaotic cavity. Inside the cavity, the field interacts with a subwavelength dielectric object from all sides, and a portion of the scattered waves are coupled out of the cavity, amplified, and fed back to the input of the nonlinear circuit. The resulting closed-feedback loop generates its own radio-frequency illumination field (> 1 GHz), which contains multiple wavelengths and is sensitive to location of the scattering object. Using the dynamical changes in the illumination field, I demonstrate subwavelength position-sensing of the scatterer's location in the cavity with a one-dimensional resolution of ~&lambda;/10,000 and a two-dimensional resolution of ~ &lambda;/300.

This novel method demonstrates that the dynamical changes of a feedback oscillator can be exploited for resolving subwavelength spatial features. Unlike conventional imaging techniques, it uses a single scalar measurement of the scattered field and takes advantage of a complex scattering environment. Furthermore, this work demonstrates the first application of quasiperiodic dynamics (oscillations with incommensurate frequencies) from a nonlinear system. Using the key ingredients from my radio-frequency system, I extend my method to an experiment that uses optical frequencies (&lambda; = 1550 nm) to demonstrate subwavelength sensing in two dimensions with a resolution of approximately 10 nm. Because this new sensing technique can be adapted to multiple experiments over vastly different length scales, it represents a potential platform for creating a new class subwavelength imaging devices.