Thermal Pollution in Urban Streams of the North Carolina Piedmont 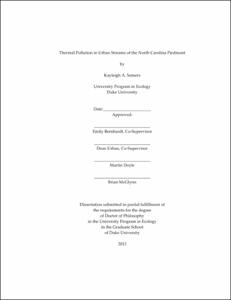 Currently, cities comprise 52% of the Earth's land surface, with this number expected to continue to grow, as most of the predicted 2.3 billion increase in population over the next 40 years is expected to occur in urban areas (United Nations Population Division 2012). Urban areas necessarily concentrate food, energy, and construction materials, and as a result tend to be hotter and more polluted than the surrounding landscape. All urban ecosystems are thus quite altered from their pre-urban state, but urban streams are particularly impacted. As low lying points on the landscape, streams are subject to the degradation caused by urban stormwaters, which are transmitted rapidly from the surfaces of pavements, roofs, and lawns through stormwater infrastructure to streams.

The systematic changes seen in many urban streams have been described as the "Urban Stream Syndrome" (USS) and serve as an organizing conceptual framework for urban stream research (Walsh et al. 2005b). A primary symptom of USS is increased flashiness in hydrographs, as stormwater in urban areas is routed efficiently into streams (Booth and Jackson 1997, Konrad and Booth 2005). With this stormwater runoff comes intense scour leading to deeply incised channels, large amounts of contaminants and nutrients, and, as will be discussed in this thesis, heat surges (Booth 1990, Tsihrintzis and Hamid 1997, Walsh et al. 2005a, Nelson and Palmer 2007, Bernhardt et al. 2008). At baseflow, urban streams are contaminated by sanitary sewage leakages, are unable to exchange water with their floodplains due to incision and with groundwater due to lower water tables, and are warmer due to canopy loss and urban heat island effects (Paul and Meyer 2001, Pickett et al. 2001, Groffman et al. 2002, 2003). These baseflow and stormflow changes lead to the loss of sensitive taxa and increase in tolerant biota, as well as changes in ecosystem function, including carbon and nitrogen processing (Paul and Meyer 2001, Meyer et al. 2005, Imberger et al. 2008, Cuffney et al. 2010).

The urban heat island effect can increase air temperatures up to 10°C above those in surrounding, non-urban areas, while impervious surfaces can reach temperatures up to 60°C (Asaeda et al. 1996, Pickett et al. 2001, Kalnay and Cai 2003, Diefenderfer 2006). These changes are particularly troublesome, as research has shown that temperature is a controlling factor in aquatic systems for both stream biota and ecosystem processes (Allen 1995, Kingsolver and Huey 2008). Thermal changes control and can alter basic morphological features of biota, such as size and growth rates (Gibbons 1970, Kingsolver and Huey 2008). USS synthesis reports have called for further research into the processes by which urban areas influence the temperature of streams and the resulting effects on the ecosystems, but until recently have largely been ignored (Paul and Meyer 2001, Wenger et al. 2009). This dissertation explores the timing, magnitude, and pattern of thermal pollution for streams within urban heat islands, with the goal of understanding what aspects of watershed development most strongly influence the thermal regimes of streams. In order to explore thermal pollution in urban streams, I asked three overarching questions:

1) How much hotter are highly urban streams than streams in less developed watersheds?

In Chapter 2, I explore the differences in baseflow and stormflow temperatures in 60 watersheds across the North Carolina Piedmont that ranged across a gradient of urbanization. I asked:

2) What reach- and watershed-scale variables are most correlated with these 2 aspects of stream thermal regimes?

I found that the 5 most urban streams were on average 0.6°C hotter at baseflow than the 4 most forested streams. During a single storm event, urban streams showed an increase over five minutes of up to 4°C, while forested streams showed little or no thermal increase. Reach-scale characteristics, specifically canopy closure and width, primarily controlled baseflow temperatures. These local factors were not important drivers of stormflow temperature changes, which were best explained by watershed-scale development and road density. Management that focuses on baseflow temperatures, such as riparian buffers and reach-scale restoration, ignores the intense urban impacts that occur regularly during storm events.

Next, in Chapter 3, I explore longitudinal temperature patterns in a single stream, Mud Creek, in Durham, North Carolina. Mud Creek's headwaters are suburban, and the stream travels through a number of housing developments before entering a 100-year-old forest. I placed 62 temperature loggers over a 1.5 km reach of this stream. To explore the mechanisms by which stormflow heat pulses dissipate along this stream reach, I asked:

1) What is the range of heat pulse magnitudes that occur over a year?

2) What is the maximum distance that a heat pulse travels downstream of urban inputs?

3) How do the magnitude and distance vary with storm characteristics, including antecedent air temperature and amount and intensity of precipitation?

I found that heat pulses with amplitude of greater than 1°C traveled more than 1 km downstream of urban inputs in 11 storm events over one year. This long dissipation distance, even in a best-case management scenario of mature and protected forest, implies that urban impacts across a developing landscape travel far downstream of the impacts themselves and into protected areas. Heat pulses greater than 1°C occurred in storms with greater intensity of and total precipitation and greater time of elevated storm flow. Air temperature, flow intensity, maximum flow, and total precipitation controlled the magnitude of the heat pulse, while the distance of dissipation was controlled by the magnitude of the heat pulses and total precipitation. The importance of air temperature, flow, and precipitation metrics imply that both magnitude and distance of dissipation of heat pulses are likely to increase with climate change, as air temperatures increase and sudden, intense storms become more frequent. This translates to even greater ecological impacts in urban landscapes like Durham municipality, where the 98.9% of streams less than 1 km downstream of a stormwater outfall will become even more likely to be impacted by urban stormwaters.

In Chapter 4, I examine which aspects about development best explain thermal differences observed at baseflow and stormflow. To do this, I selected 15 similarly sized watersheds in the North Carolina Piedmont region within 45 to 55% development that varied in other development characteristics, specifically density of stormwater infrastructure and aggregation of development patches. I asked two questions:

1) How does the configuration and connectivity of development within a watershed influence baseflow and stormflow temperatures in receiving streams?

2) How do baseflow and stormflow temperatures vary with development characteristics?

I found that aspects of development varied greatly within this urban intensity subset, with ranges for some metrics nearly equal to the variation observed across all watersheds in the landscape. Longer pipe lengths, shading from incised channels, and shaded impervious surfaces resulted in cooler baseflow temperatures. As in Mud Creek, stormflow metrics were influenced through two physical pathways: air temperature and either flow intensity, to explain overall thermal change, or antecedent flow, to explain intensity of thermal change. Greater sub-surface connectivity of development to the stream network increased thermal responsiveness to storms through faster delivery and greater amount of heated runoff. Greater proportions of forest in a watershed decreased the amount and temperature of runoff delivered to the stream, while development within the riparian zone throughout a watershed led to warm baseflow temperatures and lack of response to stormflow heat surges. By decreasing the connectivity of development to the stream network, thermal regimes of streams can be less impacted even in relatively urban watersheds.

Thermal pollution in urban streams is a problem that will only be exacerbated by predicted climate change and urban expansion. These findings imply that thermal pollution is a problem throughout urban landscapes, even far downstream of urban inputs and within protected areas, and must be managed as an important component of the USS. Future research should focus on the transferability of these findings to regions outside of the southeastern United States and to the movement of other urban pollutants, and on exploring the potential to manage these systems by decreasing sub-surface connectivity.