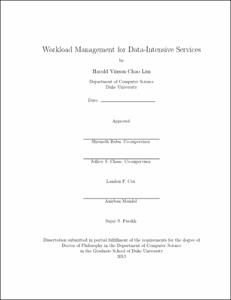 Data-intensive web services are typically composed of three tiers: i) a display tier that interacts with users and serves rich content to them, ii) a storage tier that stores the user-generated or machine-generated data used to create this content, and iii) an analytics tier that runs data analysis tasks in order to create and optimize new content. Each tier has different workloads and requirements that result in a diverse set of systems being used in modern data-intensive web services.

Servers are provisioned dynamically in the display tier to ensure that interactive client requests are served as per the latency and throughput requirements. The challenge is not only deciding automatically how many servers to provision but also when to provision them, while ensuring stable system performance and high resource utilization. To address these challenges, we have developed a new control policy for provisioning resources dynamically in coarse-grained units (e.g., adding or removing servers or virtual machines in cloud platforms). Our new policy, called proportional thresholding, converts a user-specified performance target value into a target range in order to account for the relative effect of provisioning a server on the overall workload performance.

The storage tier is similar to the display tier in some respects, but poses the additional challenge of needing redistribution of stored data when new storage nodes are added or removed. Thus, there will be some delay before the effects of changing a resource allocation will appear. Moreover, redistributing data can cause some interference to the current workload because it uses resources that can otherwise be used for processing requests. We have developed a system, called Elastore, that addresses the new challenges found in the storage tier. Elastore not only coordinates resource allocation and data redistribution to preserve stability during dynamic resource provisioning, but it also finds the best tradeoff between workload interference and data redistribution time.

We have conducted a comprehensive evaluation that shows the effectiveness of each tier's automated workload management solution.