Uncle Sam on the Family Farm: Farm Policy and the Business of Southern Agriculture, 1933-1965 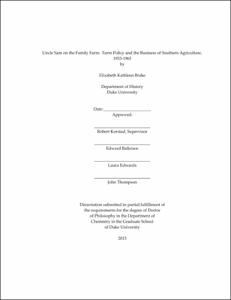 This dissertation examines federal farm policy between 1933 and 1965 and its implementation in North and South Carolina. It argues that restricted economic democracy in the Farm State - the full array of agriculture regulations, programs, and agencies associated with the federal government - enabled policy makers to adhere strictly to the principles of progressive farming and parity in the development and implementation of farm policies. These ideals emphasized industrialized, commercial farming by ever-larger farms and excluded many smaller farms from receiving the full benefit of federal farm aid. The resulting programs, by design, contributed significantly to the contraction of the farm population and the concentration of farm assets in the Carolinas. They also steered rural economic development into the channels of agribusiness as a strategy to manage the consequences of those policies. The processes and programs that drove the smallest farms out of business in the early post-war era were beginning to threaten even larger, commercial farming enterprises by the 1960s. In this context, the economic and political interests of farmers became separate from and oppositional to those of industry or consumers and removed incentives to seek common ground. The unwavering pursuit of commercial farming and agribusiness prevented diversified rural development in the Carolinas and contributed to uneven distributions of prosperity in the region.

Using the methodologies of policy, business, and social history, this work draws upon evidence from a wide variety of sources including the papers of government farm agencies, correspondence of farmers, political office holders, and personnel of the USDA. It also consults the farm press and local press, the writings of farm policy leaders, and Congressional hearings and reports. These documents provide a multifaceted perspective on the development and implementation of farm programs in the Carolinas and offers a new look at the contested process through which farm policy was made and implemented in the post war period.