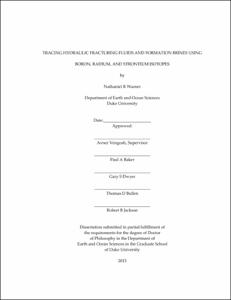 Production of oil and gas from unconventional natural gas reservoirs such as impermeable organic-rich shale formations was made possible through the use of horizontal drilling and high volume slick water hydraulic fracturing (HVHF). This combination of technologies has changed the energy landscape in the Unites States and possibly provided a vast new energy source from multiple sedimentary basins in the United States (Kargbo et al., 2010; Kerr, 2010) (Figure 1). HVHF requires large volumes of water (~5 million gallons/well) (Lutz et al., 2013) injected under high pressure to stimulate methane release from the fracture systems in the shale formations. The process is conducted within low-permeability formations, which include organic-rich shale rocks that are often the source rock for overlying conventional oil and gas reservoirs but do not easily transport gas to the well bore without stimulation. Once the permeability of the target formation is increased to a level that oil and gas can be recovered, pressure is released and 20-30% of the fluid that was injected flows back up to the surface through the well (Lutz et al., 2013). The remaining 70% stays underground, either lost to adjacent formations or imbed within the formation itself.

While HVHF operations rapidly expanded in many shale plays (e.g., Marcellus, Fayetteville), the possible negative environmental impacts remained un-quantified but a debated topic (Howarth et al., 2011). This dissertation focuses on quantification and evaluation of several water resources for evidence of contamination from HVHF. My hypotheses are: (1) HVHF have distinctive chemical and isotopic fingerprints that are different from other potential contamination sources; and (2) these fingerprints could be identified in aquifers and surface water systems.

In Pennsylvania (Chapter 1), geochemical and isotopic data shows no direct evidence of contamination in shallow drinking-water aquifers associated with natural gas extraction of the Marcellus Formation. The data instead demonstrated that brine with the same geochemical (Br/Cl, Sr/Cl, and Ba/Cl) and isotopic fingerprint (87Sr/86Sr) of the Marcellus brine was likely naturally present in the shallow formations prior to the most recent oil and gas development. The data indicates that there may be areas in northeastern Pennsylvania that may be at increased risk of contamination from HVHF because of the presence of natural pathways that connect the shallow drinking water aquifers with deeper formations. This Chapter was published in Proceedings of the National Academy of Sciences in July 2012.

A very different result was observed in Arkansas (Chapter 2). While the shallow groundwater data indicated that there was no direct evidence of contamination, there was also no indication of hydrodynamic connections between the deeper formation brine and the shallow aquifers. Indeed 87Sr/86Sr, &#948;11B, 18O, and 2H values exclude Fayetteville Formation water as a source of salinity in shallow aquifers in the study area. The combined studies indicate that site and basin-specific studies of groundwater quality are necessary in order to evaluate the potential for contamination from HVHF. The Chapter was published in Applied Geochemistry in May 2013.

Surface water disposal of hydraulic fracturing fluids and brines (Chapter 3) clearly impacted western Pennsylvania sediment and water quality. Sediments in the stream at the point of effluent discharge from a treatment facility indicate radium activities 200 times higher than any background values. The 228Ra/226Ra ratios in the sediments also indicate that the source of contamination is likely the recent treatment and disposal of Marcellus brine. Impacts were also observed farther downstream. The concentrations of bromide and chloride in the effluent were so high that an increase in the concentrations measured in the stream was elevated almost two kilometers downstream. Chapter 3 was submitted to Environmental Science and Technology in May 2013.

Overall, this thesis aims to establish inorganic geochemical and isotopic tools for identification of hydraulic fracturing fluids in the environment and assess their possible impact on both surface and groundwater resources.