Where Should Babies Come From? Measuring Schemas of Fertility and Family Formation Using Novel Theory and Methods 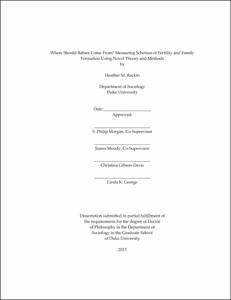 Current theories of marriage and family formation behavior tend to rely on the assumption that people can and do consciously plan both fertility and marriage and post-hoc intentions should align with a priori reasons for action (Fishbein & Azjen 2010). However, research shows this is not always the case and researchers have labeled inconsistencies between pre- and post- reports of intentions and behavior as retrospective bias. Researchers such as Bongaarts (1990) have tried to create models that minimize this "bias".

The Theory of Conjunctural Action is a new model that can explain, rather than explain away, this "bias" (Johnson-Hanks et al. 2011; Morgan and Bachrach 2011). This new theoretical innovation uses insights about the workings of the mind to gain a greater understanding of how individuals report family formation decisions and how and why they might change over time. In this theory, individuals experience conjunctures (or social context which exists in the material world) and use cognitive schemas (or frames within the mind through which individuals use to interpret the world around them). These schemas are multiple and the set can change over time as individuals incorporate new experiences into them.

In this dissertation, I explore how and why pre- and post- reports of intentions may be different using insights from the Theory of Conjunctural Action. In the second chapter, using data from the NLSY79 and log-linear models, I show that there are considerable inconsistencies between prospective and retrospective reports of fertility intentions. Specifically, nearly 6% of births (346 out of 6022) are retrospectively reported as unwanted at the time of conception by women who prospectively reported they wanted more children one or two years prior to the birth. Similarly, over 400 births are retrospectively reported as wanted by women who intended to have no more births one or two years prior (i.e., in the prior survey wave). The innovation here is to see this inconsistency, not as an error in reporting, but as different construals of a seemingly similar question. In other words, women may not be consciously intending births and then enacting these intentions; rather women may have different schemas (or meanings) of prospective and retrospective measures of fertility intentions.