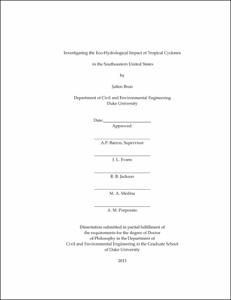 Tropical Cyclones (TCs) intensity and frequency are expected to be impacted by climate change. Despite their destructive potential, these phenomena, which can produce heavy precipitation, are also an important source of freshwater. Therefore any change in frequency, seasonal timing and intensity of TCs is expected to strongly impact the regional water cycle and consequently the freshwater availability and distribution. This is critical, due to the fact that freshwater resources in the US are under stress due to the population growth and economic development that increasingly create more demands from agricultural, municipal and industrial uses, resulting in frequent over-allocation of water resources.

In this study we concentrate on monitoring the impact of hurricanes and tropical storms on vegetation activity along their terrestrial tracks and investigate the underlying physical processes. To characterize and monitor the spatial organization and time of recovery of vegetation disturbance in the aftermath of major hurricanes over the entire southeastern US, a remote sensed framework based on MODIS enhanced vegetation index (EVI) was developed. At the SE scale, this framework was complemented by a water balance approach to estimate the variability in hurricane groundwater recharge capacity spatially and between events. Then we investigate the contribution of TCs (season totals and event by event) to the SE US annual precipitation totals from 2002 to 2011. A water budget approach applied at the drainage basins scale is used to investigate the partitioning of TCs' precipitation into surface runoff and groundwater system in the direct aftermath of major TCs. This framework allows exploring the contribution of TCs to annual precipitation totals and the consequent recharge of groundwater reservoirs across different physiographic regions (mountains, coastal and alluvial plains) versus the fraction that is quickly evacuated through the river network and surface runoff.

Then a Land surface Eco-Hydrological Model (LEHM), combining water and energy budgets with photosynthesis activity, is used to estimate Gross Primary Production (GPP) over the SE US The obtained data is compared to AmeriFlux and MODIS GPP data over the SE United States in order to establish the model's ability to capture vegetation dynamics for the different biomes of the SE US. Then, a suite of numerical experiments is conducted to evaluate the impact of Tropical Cyclones (TCs) precipitation over the SE US. The numerical experiments consist of with and without TC precipitation simulations by replacing the signature of TC forcing by NARR-derived climatology of atmospheric forcing ahead of landfall during the TC terrestrial path. The comparison of these GPP estimates with those obtained with the normal forcing result in areas of discrepancies where the GPP was significantly modulated by TC activity. These areas show up to 10% variability over the last decade.