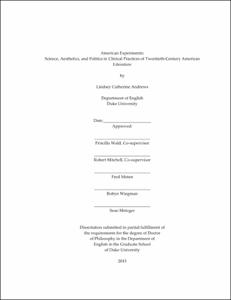 This dissertation is concerned with the relationships between experiments in literature, science, and politics in twentieth-century United States culture. I argue that the three can be considered together by understanding "experimentation" as a set of processes rather than a method, and highlighting the centrality of writing and reading to experiments in all three arenas. Drawing on scientist Ludwik Fleck's concept of "valuable experiments," I read specific experiments in each field in conversation with the others, highlighting the ways in which science and politics require aesthetic structures, the ways in which science and literature reconfigure politics, and the ways in which politics and literature can intervene in and reconfigure scientific practices. Ultimately, I try to develop a reading practice that can make visible the shared transformative capacities of science, literature, and radical politics.

In the course of three chapters, I analyze the formal and conceptual innovations of writers such as William Burroughs, Ralph Ellison, and Carson McCullers, who were intimately affected by the uses of experimental science in corrective institutional practice. In doing so, I develop a concept of "experimental literature" that is distinct from avant-garde literature and can account for the investments that these writers share with scientists such as Albert Hofmann, Albert Einstein, and Margaret Mead. I argue that experimental writers denature literary genres that depend on coherent subjects, transparent reality, and developmental progress in order to disrupt similar assumptions that underpin positivist science. By understanding valuable experimental science and writing as continuous challenges to standardized scientific knowledge, I show how these writers contribute to ongoing radical social projects of queer and black radical traditions--such as those of George Jackson and the Combahee River Collective--which are grounded in knowledge as an aesthetic and political practice.