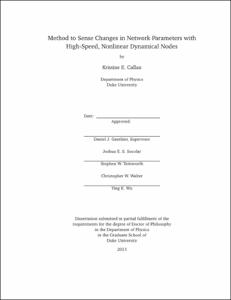 The study of dynamics on networks has been a major focus of nonlinear science over the past decade. Inferring network properties from the nodal dynamics is both a challenging task and of growing importance for applied network science. A subset of this broad question is: How can one determine changes to the coupling strength between elements in a small network of chaotic oscillators just by measuring the dynamics of one of the elements (nodes) in the network? In this dissertation, I propose and report on an implementation of a method to simultaneously determine: (1) which link is affected and (2) by how much it is attenuated when the coupling strength along one of the links in a small network of dynamical nodes is changed. After proper calibration, realizing this method involves only measurements of the dynamical features of a single node.

Previous attempts to solve this problem focus mainly on synchronization-based approaches implemented in low-speed, homogeneous experimental systems. In contrast, the experimental apparatus I use to implement my method comprises two high-speed (ps-timescale), heterogeneous optoelectronic oscillators (OEOs). Each OEO constitutes a node, and a network is formed by mutually coupling two nodes. I find that the correlation properties of the chaotic dynamics generated by the nodes, which are heavily influenced by the propagation time delays in the network, change in a quantifiable way when the coupling strength along either the input or output link is attenuated. By monitoring multiple aspects of the correlation properties, which I call ``time delay signatures'' (TDSs), I find that the affected link can be determined for changes in coupling strength greater than 20% &plusmn; 10%. Due to the sensitivity with which the TDSs change, it is also feasible to determine approximately the time-varying coupling strength for large enough attenuations.

I also verify that the TDSs' sensitivity to changes in coupling strength are captured by a simple deterministic model that takes into account each OEO's nonlinearities, bandpass filtering, and time delays. I find qualitative agreement between my experimental observations and numerical simulations of the model and also use the model to explore the dependence of the TDS signature on the OEO heterogeneity. I find that making the time delays identical leads to larger changes in TDSs, which improves the precision with which the coupling strength can be determined. This also leads, however, to a decrease in the ability to determine which link has been attenuated, indicating that a balance must be struck between optimizing the network's ability to discern the new coupling strength and the affected link. To investigate the role of the nonlinearity, I again test my method numerically using the same delay-coupled topology, but with dynamics generated by a linear stochastic process. I find that sensing can be achieved in the absence of nonlinear effects, but that, with regards to determining which link is affected, the performance is optimized differently in the linear and nonlinear cases.

This method could be extended to design a low-profile intrusion detection system, where several OEOs are spread around a scene and wirelessly coupled via antennas. The ultra-wide-band signals emitted by the nodes (OEOs) can pass through building materials with little attenuation, but would be strongly attenuated by a person who enters the path between two nodes. Beyond practical applications, it also remains to be seen if TDSs could prove to be a simple way to analyze information flow in networks with chaotic dynamics and propagation delays between the nodes.