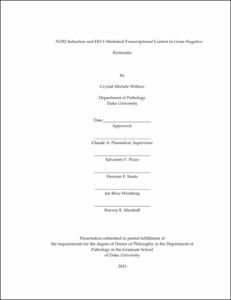 Nitric oxide (NO) is an endogenous gaseous signaling molecule produced by three NO synthase isoforms (NOS1, 2, 3) and important in host defense. The induction of NOS2 during bacterial sepsis is critical for pathogen clearance but its sustained activation has long been associated with increased mortality secondary to multiple organ dysfunction syndrome (MODS). High levels of NO produced by NOS2 incite intrinsic cellular dysfunction, in part by damaging macromolecules through nitration and/or nitrosylation. These include mitochondrial DNA (mtDNA) and enzymes of key mitochondrial pathways required for maintenance of normal O2 utilization and energy homeostasis. However, animal studies and clinical trials inhibiting NOS2 have demonstrated pronounced organ dysfunction and increased mortality in response to live bacterial infections, confirming that NOS2 confers pro-survival benefits. Of particular interest here, the constitutive NOS1 and NOS3 have been linked to the up-regulation of nuclear genes involved in mitochondrial biogenesis but no comparable role has been described for NOS2. <italic> Therefore, I hypothesized that NOS2 is indispensible for host protection but must be tightly regulated to ensure NO levels are high enough to activate mitochondrial and other pro-survival genes, but below the threshold for cellular damage.</italic>

This hypothesis was explored with two major Aims. The <italic>first Aim</italic> was to define the role of NOS2 in the activation of mitochondrial biogenesis in the heart of <italic>E. coli</italic>-treated mice. The <italic>second</italic> was to investigate the ability of NOS2 to be transcriptionally regulated by an enzyme previously shown to induce mitochondrial biogenesis, heme oxygenase-1 (HO-1). This hypothesis was tested using an <italic>in vivo</italic> model of sublethal heat-killed <italic>E. coli</italic> (<italic>HkEC</italic>) peritonitis in C57B/L6 (Wt), NOS2-/-, and TLR4-/- mice. Additionally, <italic>in vitro</italic> systems of mouse AML-12 or Hepa 1-6 cells pretreated with HO-1 activators or <italic>Hmox1</italic> shRNA prior to inflammatory challenge with lipopolysaccharide (LPS) +/- tumor necrosis factor-&alpha; (TNF-&alpha;). For the first Aim, Wt, NOS2-/-, and TLR4-/- mice were treated with (<italic>HkEC</italic> and cardiac tissue analyzed for mitochondrial function, expression of nuclear and mitochondrial proteins needed for mitochondrial biogenesis, and histological expression of NOS2 and TLR4 relative to changes in mitochondrial mass. For the second Aim, Wt mice were pretreated with hemin or carbon monoxide (CO) to activate HO-1 prior to <italic>HkEC</italic>-peritonitis. Liver tissue in these animals was evaluated at four hours for HO-1 induction, <italic>Nos2</italic> mRNA expression, cytokine profiles, and nuclear factor (NF)-&kappa;B activation. Liver cell lines were pretreated with hemin, CO-releasing molecule (CORM), or bilirubin one hour before LPS exposure and the <italic>Nos2</italic> transcriptional response evaluated at two and 24 hours. The MTT assay was used to confirm that <italic>in vitro</italic> treatments were not lethal.

These studies demonstrated that <italic>HkEC</italic> induced mtDNA damage in the heart that was repaired in Wt mice but not in NOS2-deficient mice. In KO mice, sustained mtDNA damage was associated with the reduced expression of nuclear (NRF-1, PGC-1&alpha;) and mitochondrial (Tfam, Pol-&gamma;) proteins needed for mitochondrial biogenesis. The findings thus supported that NOS2 is required for mitochondrial biogenesis in the heart during Gram-negative challenge. Evaluation of the relationship between HO-1 and NOS2 in murine liver was more complex; HO-1 activation in <italic>HkEC</italic>-treated Wt mice attenuated 4-hour <italic>Nos2</italic> gene transcription. In liver cell lines, hemin, CORM, and bilirubin were unable to suppress <italic>Nos2</italic> expression at the time of maximal induction (2 hours). <italic>Nos2</italic> was, however, suppressed by 24 hours, suggesting that the regulatory impact of HO-1 induction was not engaged early enough to reduce <italic>Nos2</italic> transcription at 2 hours. It is concluded that NOS2 induction in bacterial sepsis optimizes the expression of the mitochondrial biogenesis transcriptional program, which subsequently can also be regulated by HO-1/CO in murine liver. This provides a potential new mechanism by which immune suppression and mitochondrial repair can occur in tandem during the acute inflammatory response.