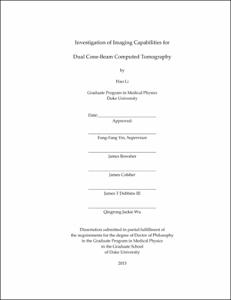 A bench-top dual cone-beam computed tomography (CBCT) system was developed consisting of two orthogonally placed 40x30 cm<super>2</super> flat-panel detectors and two conventional X-ray tubes with two individual high-voltage generators sharing the same rotational axis. The X-ray source to detector distance is 150 cm and X-ray source to rotational axis distance is 100 cm for both subsystems. The objects are scanned through 200° of rotation. The dual CBCT (DCBCT) system utilized 110° of projection data from one detector and 90° from the other while the two individual single CBCTs utilized 200° data from each detector. The system performance was characterized in terms of uniformity, contrast, spatial resolution, noise power spectrum and CT number linearity. The uniformity, within the axial slice and along the longitudinal direction, and noise power spectrum were assessed by scanning a water bucket; the contrast and CT number linearity were measured using the Catphan phantom; and the spatial resolution was evaluated using a tungsten wire phantom. A skull phantom and a ham were also scanned to provide qualitative evaluation of high- and low-contrast resolution. Each measurement was compared between dual and single CBCT systems.

Compared with single CBCT, the DCBCT presented: 1) a decrease in uniformity by 1.9% in axial view and 1.1% in the longitudinal view, as averaged for four energies (80, 100, 125 and 150 kVp); 2) comparable or slightly better contrast to noise ratio (CNR) for low-contrast objects and comparable contrast for high-contrast objects; 3) comparable spatial resolution; 4) comparable CT number linearity with R<super>2</super> &#8805; 0.99 for all four tested energies; 5) lower noise power spectrum in magnitude. DCBCT images of the skull phantom and the ham demonstrated both high-contrast resolution and good soft-tissue contrast.

One of the major challenges for clinical implementation of four-dimensional (4D) CBCT is the long scan time. To investigate the 4D imaging capabilities of the DCBCT system, motion phantom studies were conducted to validate the efficiency by comparing 4D images generated from 4D-DCBCT and 4D-CBCT. First, a simple sinusoidal profile was used to confirm the scan time reduction. Next, both irregular sinusoidal and patient-derived profiles were used to investigate the advantage of temporally correlated orthogonal projections due to a reduced scan time. Normalized mutual information (NMI) between 4D-DCBCT and 4D-CBCT was used for quantitative evaluation.

For dual kV energy imaging, we acquired 80kVp projections and 150 kVp projections, with an additional 0.8 mm tin filtration. The virtual monochromatic (VM) technique was implemented, by first decomposing these projections into acrylic and aluminum basis material projections to synthesize VM projections, which were then used to reconstruct VM CBCTs. The effect of the VM CBCT on metal artifact reduction was evaluated with an in-house titanium-BB phantom. The optimal VM energy to maximize CNR for iodine contrast and minimize beam hardening in VM CBCT was determined using a water phantom containing two iodine concentrations. The linearly-mixed (LM) technique was implemented by linearly combining the low- (80kVp) and high-energy (150kVp) CBCTs. The dose partitioning between low- and high-energy CBCTs was varied (20%, 40%, 60% and 80% for low-energy) while keeping total dose approximately equal to single-energy CBCTs, measured using an ion chamber. Noise levels and CNRs for four tissue types were investigated for dual-energy LM CBCTs in comparison with single-energy CBCTs at 80, 100, 125 and 150kVp.

The VM technique showed a substantial reduction of metal artifacts at 100 keV with a 40% reduction in the background standard deviation compared with a 125 kVp single-energy scan of equal dose. The VM energy to maximize CNR for both iodine concentrations and minimize beam hardening in the metal-free object was 50 keV and 60 keV, respectively. The difference in average noise levels measured in the phantom background was 1.2% for dual-energy LM CBCTs and equivalent-dose single-energy CBCTs. CNR values in the LM CBCTs of any dose partitioning were better than those of 150 kVp single-energy CBCTs. The average CNRs for four tissue types with 80% dose fraction at low-energy showed 9.0% and 4.1% improvement relative to 100 kVp and 125 kVp single-energy CBCTs, respectively. CNRs for low contrast objects improved as dose partitioning was more heavily weighted towards low-energy (80kVp) for LM CBCTs.

For application of the dual-energy technique in the kilovoltage (kV) and megavoltage (MV) range, we acquired both MV projections (from gantry angle of 0° to 100°) and kV projections (90° to 200°) with the current orthogonal kV/MV imaging hardware equipped in modern linear accelerators, as gantry rotated a total of 110°. A selected range of overlap projections between 90° to 100° were then decomposed into two material projections using experimentally determined parameters from orthogonally stacked aluminum and acrylic step-wedges. Given attenuation coefficients of aluminum and acrylic at a predetermined energy, one set of VM projections could be synthesized from two corresponding sets of decomposed projections. Two linear functions were generated using projection information at overlap angles to convert kV and MV projections at non-overlap angles to approximate VM projections for CBCT reconstruction. The CNRs were calculated for different inserts in VM CBCTs of a CatPhan phantom with various selected energies and compared with those in kV and MV CBCTs. The effect of overlap projection number on CNR was evaluated. Additionally, the effect of beam orientation was studied by scanning the CatPhan sandwiched with two 5 cm solid-water phantoms on both lateral sides and an electronic density phantom with two metal bolt inserts.

Proper selection of VM energy (30keV and 40keV for low-density polyethylene (LDPE), polymethylpentene (PMP), 2MeV for Delrin) provided comparable or even better CNR results as compared with kV or MV CBCT. An increased number of overlap between kV and MV projections demonstrated only marginal improvements of CNR for different inserts (with the exception of LDPE) and therefore one projection overlap was found to be sufficient for the CatPhan study. It was also evident that the optimal CBCT image quality was achieved when MV beams penetrated through the heavy attenuation direction of the object.

In conclusion, the performance of a bench-top DCBCT imaging system has been characterized and is comparable to that of a single CBCT. The 4D-DCBCT provides an efficient 4D imaging technique for motion management. The scan time is reduced by approximately a factor of two. The temporally correlated orthogonal projections improved the image blur across 4D phase images. Dual-energy CBCT imaging techniques were implemented to synthesize VM CBCT and LM CBCTs. VM CBCT was effective at achieving metal artifact reduction. Depending on the dose-partitioning scheme, LM CBCT demonstrated the potential to improve CNR for low contrast objects compared with single-energy CBCT acquired with equivalent dose. A novel technique was developed to generate VM CBCTs from kV/MV projections. This technique has the potential to improve CNR at selected VM energies and to suppress artifacts at appropriate beam orientations.