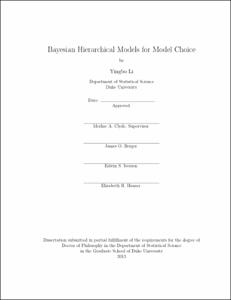 With the development of modern data collection approaches, researchers may collect hundreds to millions of variables, yet may not need to utilize all explanatory variables available in predictive models. Hence, choosing models that consist of a subset of variables often becomes a crucial step. In linear regression, variable selection not only reduces model complexity, but also prevents over-fitting. From a Bayesian perspective, prior specification of model parameters plays an important role in model selection as well as parameter estimation, and often prevents over-fitting through shrinkage and model averaging.

We develop two novel hierarchical priors for selection and model averaging, for Generalized Linear Models (GLMs) and normal linear regression, respectively. They can be considered as "spike-and-slab" prior distributions or more appropriately "spike- and-bell" distributions. Under these priors we achieve dimension reduction, since their point masses at zero allow predictors to be excluded with positive posterior probability. In addition, these hierarchical priors have heavy tails to provide robust- ness when MLE's are far from zero.

Zellner's g-prior is widely used in linear models. It preserves correlation structure among predictors in its prior covariance, and yields closed-form marginal likelihoods which leads to huge computational savings by avoiding sampling in the parameter space. Mixtures of g-priors avoid fixing g in advance, and can resolve consistency problems that arise with fixed g. For GLMs, we show that the mixture of g-priors using a Compound Confluent Hypergeometric distribution unifies existing choices in the literature and maintains their good properties such as tractable (approximate) marginal likelihoods and asymptotic consistency for model selection and parameter estimation under specific values of the hyper parameters.

While the g-prior is invariant under rotation within a model, a potential problem with the g-prior is that it inherits the instability of ordinary least squares (OLS) estimates when predictors are highly correlated. We build a hierarchical prior based on scale mixtures of independent normals, which incorporates invariance under rotations within models like ridge regression and the g-prior, but has heavy tails like the Zeller-Siow Cauchy prior. We find this method out-performs the gold standard mixture of g-priors and other methods in the case of highly correlated predictors in Gaussian linear models. We incorporate a non-parametric structure, the Dirichlet Process (DP) as a hyper prior, to allow more flexibility and adaptivity to the data.