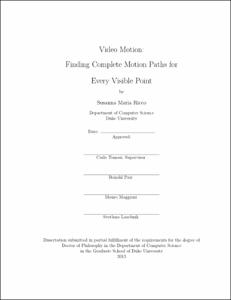 The problem of understanding motion in video has been an area of intense research in computer vision for decades. The traditional approach is to represent motion using optical flow fields, which describe the two-dimensional instantaneous velocity at every pixel in every frame. We present a new approach to describing motion in video in which each visible world point is associated with a sequence-length video motion path. A video motion path lists the location where a world point would appear if it were visible in every frame of the sequence. Each motion path is coupled with a vector of binary visibility flags for the associated point that identify the frames in which the tracked point is unoccluded.

We represent paths for all visible points in a particular sequence using a single linear subspace. The key insight we exploit is that, for many sequences, this subspace is low-dimensional, scaling with the complexity of the deformations and the number of independent objects in the scene, rather than the number of frames in the sequence. Restricting all paths to lie within a single motion subspace provides strong regularization that allows us to extend paths through brief occlusions, relying on evidence from the visible frames to hallucinate the unseen locations.

This thesis presents our mathematical model of video motion. We define a path objective function that optimizes a set of paths given estimates of visible intervals, under the assumption that motion is generally spatially smooth and that the appearance of a tracked point remains constant over time. We estimate visibility based on global properties of all paths, enforcing the physical requirement that at least one tracked point must be visible at every pixel in the video. The model assumes the existence of an appropriate path motion basis; we find a sequence-specific basis through analysis of point tracks from a frame-to-frame tracker. Tracking failures caused by image noise, non-rigid deformations, or occlusions complicate the problem by introducing missing data. We update standard trackers to aggressively reinitialize points lost in earlier frames. Finally, we improve on standard Principal Component Analysis with missing data by introducing a novel compaction step that associates these relocalized points, reducing the amount of missing data that must be overcome. The full system achieves state-of-the-art results, recovering dense, accurate, long-range point correspondences in the face of significant occlusions.