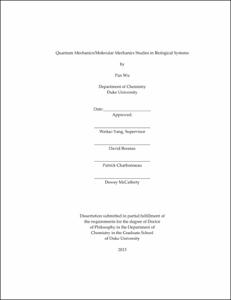 Catalytic mechanism is the key to understand how enzyme facilitates chemical reactions. A comprehensive understanding of the mechanism would shed light on developing new drug candidates or find similar protein targets. In the first two sections, we explored two enzyme systems, 4-oxalocrotonate tautomerase (4-OT) and anhydro-N-acetylmuramic acid kinase (AnmK). 4-OT is an essential enzyme in the degradative metabolism pathway occurring in the Krebs cycle. The proton transfer process catalyzed by 4-OT was studied to elaborate its catalytic mechanism. With QM/MM simulation, we demonstrated that the enzyme works under half-of-the-sites occupation, i.e. only three of its six active sites are occupied by the substrates. Two sequential proton transfers occur: one proton from the C3 position of 2o4hex is initially transferred to the nitrogen atom of the general base, Pro1. Subsequently, the same proton is shuttled back to the position C5 of 2o4hex to complete the proton transfer process in 4-OT. During the catalytic reaction, conformational changes (i.e., 1-carboxyl group rotation) of 2o4hex cannot proceed in the natural hexametric structure. We further found that the docking process of 2o4hex can influence the specific reactant conformations and an alternative substrate (2-hydroxymuconate) may serve as reactant under a different reaction mechanism than 2o4hex. The other enzyme, AnmK, plays an important role in the cell wall recycling process in Escherichia coli. The catalytic process involves four entangled steps: water nucleophile attack, 1, 6-anhydro bond breaking, phosphorylation, and saccharide conformational change. This is a great challenge to present enzymatic simulation methods. We proposed a comprehensive scheme to tackle this problem, and our results indicate a proton shuttle network may exist, which position a water molecule well for the nucleophile attack.

Proton-coupled electron transfer is a reaction mechanism involves simultaneous transfer of both proton(s) and electron(s). It is pervasive in redox reactions and has significant importance in photosynthesis, respiration, and electrochemical process such as hydrogen-ion discharge. We applied the fractional number of electron approach and QM/MM scheme to study the basic principle about how electron transfer (ET) and proton transfer (PT) coupled together. This approach was employed in the oxidation of an intra-molecular hydrogen bonded phenol (PhOH...N<), with two well-defined reactions coordinates (PT: proton position; ET: energy gap). The computed absolute redox potential agrees well with the experimental data. We found that at a low applied overpotential (< 5.0 eV), proton transfer occurs prior to electron, and this gives a stepwise proton-electron transfer pathway (PT-ET). With a high overpotential (> 7.0 eV), the reaction occurs in a reverse sequence with proton motion triggered by electron transfer (ET-PT). When the overpotential is between 5.0 and 7.0 eV, the reaction proceeds by concerted proton-electron transfer (CPET) mechanism. Our work suggests that the mechanistic details of PCET process can be changed by altering electrode potentials.