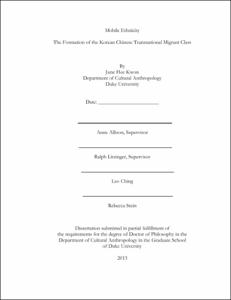 This dissertation, Mobile Ethnicity, examines the formation of a transnational ethnic working class and the dynamics of remittance development in the context of Korean Chinese labor migration between China and Korea. I conducted multi-sited field research for over two years, mainly in Seoul, South Korea, and the Korean Chinese Autonomous Prefecture of Yanbian, China, the ethnic zone bordering North Korea. My ethnography is built on a local saying: "Everybody is gone with the Korean Wind." The Korean Wind is the popular name for the massive Korean Chinese transnational labor migration to South Korea that occurred mostly during the 1990s and 2000s, at the intersection of post-Cold War and post-socialist cultures. I especially highlight the Korean Wind as a unique product of China's economic reform and open economy (gaigekaifang), which has affected not only Korean Chinese but also Han Chinese in Yanbian and elsewhere in the region.

Through the lenses of kinship, development, money, love, bodies, and time, I analyze the new affect and materiality, new forms of belonging and dwelling, and new hopes and frustrations of mobile ethnicity. On the one hand, I trace the reconstituted subjectivity of Korean Chinese as a particular ethnic working class in a transnational setting. On the other hand, I map the re-characterized ethnic space of Yanbian as a borderland traversed by a myriad of different agents. Caught between the "Korean dream" and the "Chinese dream," Korean Chinese have chosen transnational mobility as a way of dealing with the contingencies of neoliberalism and globalization. But their way of working for a better future has created unexpected vulnerabilities, sealing them into a circuit of migration as a transnational ethnic working class.

This ethnography illuminates the ripple effects of the Korean Wind with a focus on remittances, as Korean Chinese have discovered, promoted, and deployed their ethnic currency in the transnational labor market. On a macro level, remittances play a critical role in relocating populations (both pulling them into spaces and pulling them out), and create an intersection of internal migration and transnational migration, thereby reshaping the ethnic relationships and spatial characteristics of the region. I emphasize the vulnerable characteristics of a remittance-dependent economy, which fluctuates in response to exchange rates and global economic forces. On a personal level, remittances are not only gifts or realizations of familial duty, but also an unstable form of currency requiring careful management and submission to a peculiar temporality of long waits and unknown futures. The life built upon the contingent flow of remittances has created and been impacted by the transnational temporality, constantly moving back and forth between the sharply split worlds; working and resting, making money and spending money, Korea and Yanbian. Rigid visa regulations by the Korean government especially force migrant workers into a "split life," as they must weave two different worlds into a common everyday life, and discipline their bodies to switch easily between two different modes of time.

This study examines "Yanbian Socialism" that has responded to and intersected with the Korean Wind, a particular socialism that stresses overt expressions of the Korean Chinese political faith in China while acknowledging the prefecture's cultural and economic links to Korea. My dissertation aims to weave together an account of the particular structure of feeling experienced by Korean Chinese as they are caught between confusion and hesitation, contention and contradiction, economic desperation and political caution. I view their constant adjustments and revisions as a major influence on the formation of mobile ethnicity. My work thus provides a new understanding of the politics of class and gender among Chinese ethnic minorities, articulated through transnational mobility at the intersection of post-Cold War, post-socialist, and neoliberal currents across and beyond East Asia.