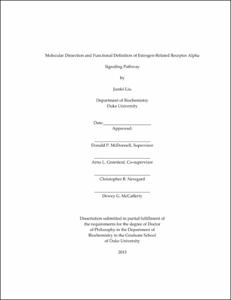 The estrogen-related receptor alpha (ERR&alpha;) is an orphan nuclear receptor (NR) with no natural ligand identified. Recent studies report that ERR&alpha; expression and activity correlate with poor prognosis in breast cancer. It is also suggested that ERR&alpha; is involved in tumor growth and progression, thus this receptor may be a therapeutic target in the treatment of breast cancer. However, the specific role of ERR&alpha; in breast cancer is not fully understood. Similar to other nuclear receptors, ERR has been suggested to regulate target gene transcription through both classical (direct DNA binding) and non-canonical (tethering mechanisms) to effect various aspects of tumor pathogenesis, such as angiogenesis, regulation of hypoxic response, tumor growth, and migration. Thus, the objective of this dissertation research is to explore the roles of ERR&alpha; in breast cancer by (a) identifying novel ERR&alpha; target genes important for tumor pathogenesis, (b) characterizing the molecular mechanism of non-canonical actions of ERR&alpha;-mediated gene transcription, and (c) examining the structure basis of ERR&alpha; antagonism for future pharmaceutical exploitation. First, we identified an ERR&alpha; target gene, ECM1, which is relevant to breast cancer angiogenesis. The role of ECM1 in angiogenesis was confirmed by endothelial tube formation assay. We further showed that knocking down ECM1 has a dramatic inhibitory effect on tumor xenograft growth. This result, for the first time, directly demonstrates the role of ECM1 in tumor environment and further sheds light on the significance of ERR&alpha-regulated genes in tumors angiogenesis. Next, we explored the molecular mechanism of ERR&alpha; non-canonical pathways using transcriptional reporter assay and ERR&alpha; DNA-binding domain (DBD) mutants. We discovered that the expression of carbonic anhydrase 9 (CA9), a target gene of one of the ERR&alpha; tethering partner hypoxia inducible factor-1 (HIF-1), does not require direct binding of ERR&alpha; to DNA but its DBD is indispensible. These results reflect on the importance of ERR&alpha; DBD even in the non-canonical signaling of ERR&alpha;, which brings challenges to dissecting ERR&alpha; canonical/non-canonical pathways in the future. Finally, to determine the molecular mechanisms underlying ERR&alpha; antagonism, we probed the conformations of ERR&alpha; upon antagonist treatments. M13 phage display was used to screen for ERR&alpha;-interacting peptides. We identified peptides that interact with ERR&alpha; in the activation function 2 (AF2) domain, some of which are able to distinguish the binding of different classes of ERR&alpha; antagonists. Cumulatively, these studies have explored the biological functions of ERR&alpha; and the molecular basis ERR&alpha;-mediated signaling pathways.