A Matter of Decision: Experimental Art in Hungary and Yugoslavia, 1968-1989 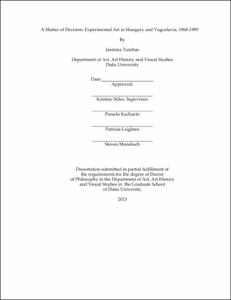 This dissertation analyzes experimental art movements in Hungary and the former Yugoslavia from 1968 to 1989, examining the variety of ways that artists responded to the ideological and practical failures of communism. I also deliberate on how artists, living in the specter of Marxist ideology, negotiated socio-political and cultural systems dominated by the state; how they undermined the moral consciousness that state socialism imposed from above; and how they created alternative ways of being in an era that had promised the opening of society and art but that failed that pledge. I suggest that some artists increasingly questioned the state's hegemony in everyday relationships, language, and symbols, and attempted to neutralize self-censorship and gain sovereignty over their own bodies and minds through "decision as art." The dissertation approaches authoritarian domination within the context of the artists' aesthetic choices, especially the development of conceptual and performance art as a mode of opposition. Deliberating on the notion of decision as central to the conceptualization and execution of resistance to the state, I focus on the alternative ways in which Yugoslavian and Hungarian artists made art in variegated forms and modes of ethical commitment. I argue that such art must be understood as an active decision to live in and through art while enduring political circumstance.