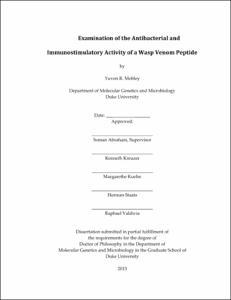 Antimicrobial peptides (AMPs) are part of the innate immune system that is widely distributed in nature, acting as a defense mechanism against invading microorganisms. AMPs have potent antimicrobial activity against a range of microorganisms including fungi, bacteria and viruses. In view of growing multidrug resistance, AMPs are increasingly being viewed as potential therapeutic agents with a novel mechanism of action. Mastoparan is a natural, highly positively charged AMP derived from the venom of wasps. It was originally of interest based on its inherent mast cell degranulation activity. Previously, mastoparan has been shown to exhibit antimicrobial activity in vitro however these studies have been limited in scope. Here we hypothesize that mastoparan possess the capacity to be a potent broad spectrum antibacterial agent including activity against multidrug resistant bacteria.

We examined the scope of antibacterial activity exhibited by mastoparan using a variety of antimicrobial susceptibility tests and have utilized a bacterial skin infection (S. aureus) model to determine the potential of mastoparan to serve as a therapeutic agent. We tested mastoparan against 4 Gram-positive clinical isolates (e.g., S. aureus, and E. faecium), 9 Gram-negative clinical isolates (e.g., E. coli, P. aeruginosa, and B. cepacia), and 4 multidrug resistant clinical isolates (e.g., MRSA, ESBL E.coli, and ESBL K. pneumonia). These studies reveal that mastoparan exhibits broad spectrum activity against both Gram-negative (MIC: 1.9 - 125 &mug/ml) and Gram-positive (MIC: 15.6 - 125 &mug/ml) bacteria and against multidrug resistant bacteria (MIC: 7.8 - 125 &mug/ml). We also demonstrated that mastoparan disrupts the bacterial membrane, exhibits fast acting antibacterial activity and is highly effective against both multiplying and non-multiplying bacteria. Furthermore, we have shown that mastoparan demonstrates efficacy as a topical antimicrobial agent reducing lesion size by up to 79% and the amount of bacteria recovered from skin lesions by up to a 98% reduction. Based on these results we conclude that mastoparan is a highly effective antibacterial agent and is therefore a potential alternative to currently antibiotics. Mastoparan offers a promising new therapeutic option for treating bacterial infections.