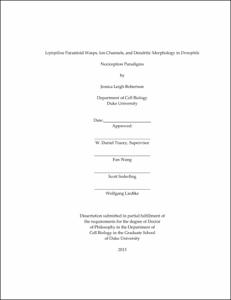 Almost everyone will experience pain at some point in their lives. While pain is generally adaptive, and alerts the body to potential tissue damage, chronic pain is a disruptive disease with a huge psychological and economic cost. Of all the senses, the molecular basis of pain is perhaps the least understood. Without an understanding of the genes involved in pain, it is difficult to develop new drugs to treat pain. Current pain drugs are often ineffective at treating pain, especially chronic pain, and can cause many side effects. In this dissertation, I have further developed the Drosophila nociception paradigm.

First, I investigated the responses of Drosophila melanogaster larvae to a naturally occurring noxious stimulus, the parasitoid wasp. These wasps use a sharp ovipositor to lay their eggs inside of the larvae. The eggs hatch, and the wasp larva then eats the Drosophila larva from the inside, resulting in the death of the Drosophila. In response, Drosophila larvae have evolved multiple mechanosensory behaviors to fight attacks from wasps. The type of defensive behavior depends on the somatotopic location of the attack along the larval body wall, as well as the degree of penetration of the larval cuticle by the wasp ovipositor. I found that the class IV neurons, which are the larval nociceptors, and the pickpocket gene are important for mediating nocifensive responses to parasitoid wasp attacks.

While parasitoid wasps are the most ecologically relevant noxious stimulus for Drosophila larvae, the behavioral assays are time consuming and very low throughput. Thus, I utilized a thermal nociception assay in a genetic screen to discover new ion channels involved in the detection of noxious heat. In this assay larvae are touched lightly with a hot probe. In collaboration with Kia Walcott, I completed a forward genetic screen that knocked down 90% of the ion channels in the Drosophila genome. We found fourteen ion channel genes that are important for larval nociception.

The dendritic morphology of the nociceptor neurons is well studied, but the role of ion channels in governing the dendritic morphology had yet to be explored. We therefore screened the fourteen genes that we found to have a role in thermal nociception for a role in dendrite morphogenesis. Knockdown of six of the genes caused dendritic defects. These required genes represented a wide variety of transporters and channels, including potassium channels, TRP channels, and ligand gated channels. I also generated a genetic null mutant fly for coyotemint, an ABC transporter.

Lastly, I investigated the role of the calcium gated potassium channel, SK, in thermal nociception. Previous work in the lab had demonstrated that larvae null for SK exhibited a hypersensitive phenotype to a noxious thermal stimulus. I determined that one isoform of SK, SK-M, rescues this phenotype, and is necessary for thermal nociception. Additionally, I built an apparatus that allowed for the confocal imaging of genetically encoded calcium indicators while a larva undergoes a thermal ramp. This set-up allowed us to explore the role of SK in the physiology of the class IV neurons. We found the larvae null for SK exhibit increased levels of calcium during a thermal ramp.

In conclusion, my work has explored both the ethology of nociception in Drosophila larvae, as well as engaged in the search for new genes involved in nociception.