Expansion of the 4D XCAT Phantom Library with Anatomical Texture 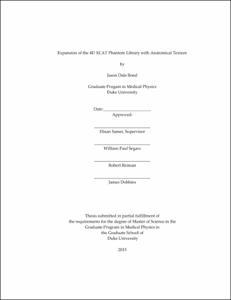 Computational phantoms are set to play an important role in imaging research. As medicine moves increasingly towards providing individualized, patient-specific care, it is imperative that simulations be completed on patient-specific anatomy, rather than a reference standard. To that end, there is need for a variety of realistic phantoms for clinical studies.

In addition to the expanding the XCAT library, the feasibility of incorporating texture was investigated. Currently, the XCAT phantom structures are assumed to be homogeneous. This can lead to unrealistic appearance when the phantoms are combined with imaging simulations, particularly in CT. The purpose of this project was to capture anatomical texture and test it in a simulated phantom. Image data from the aforementioned patient CT database served as the source of anatomical texture.

The images were de-noised using anisotropic diffusion. Next, several regions of interest (ROIs) were taken from the liver and lungs of CT images. Using the ROIs as a source of texture, a larger stochastic texture image-set was created using the Image Quilting algorithm.

The visual human adult male XCAT phantom was voxelized at the same resolution as the texture image. The voxels inside the liver were directly replaced by the corresponding voxels of texture. Similarly for the lung, the voxels between the existing lung bronchi/blood vessels and the lung wall were replaced by texture voxels. This procedure was performed using ten different patient CT image-sets as sources of texture.

To validate the similarity of the artificial textures to the source textures, reconstructions of the adult male XCAT phantom with added textures were compared to the clinical images via receiver operator characteristic (ROC) analysis, a two-sample t-test, equivalence test, and through comparing absolute differences between scores.

It was concluded that this framework provides a valuable tool in which anatomical texture can be incorporated into computational phantoms. It is anticipated that this step towards making many anatomically variable virtual models indicative of a patient populace and making these models more realistic will be useful in medical imaging research, especially for studies relating to image quality.