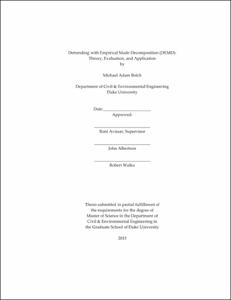 Land-surface heterogeneity (LSH) at different scales has significant influence on atmospheric boundary layer (ABL) buoyant and shear turbulence generation and transfers of water, carbon and heat. The extent of proliferation of this influence into larger-scale circulations and atmospheric structures is a topic continually investigated in experimental and numerical studies, in many cases with the hopes of improving land-atmosphere parameterizations for modeling purposes. The blending height is a potential metric for the vertical propagation of LSH effects into the ABL, and has been the subject of study for several decades. Proper assessment of the efficacy of blending height theory invites the combination of observations throughout ABLs above different LSH scales with model simulations of the observed ABL and LSH conditions. The central goal of this project is to develop an apt and thoroughly scrutinized method for procuring ABL observations that are accurately detrended and justifiably relevant for such a study, referred to here as Detrending with Empirical Mode Decomposition (DEMD).

HOP data are especially susceptible to the spurious influence of platform motion on ABL data, largely due to the low-altitude and low-airspeed capabilities of the HOP. For example, HOP altitude motion in the presence of a lapse rate can cause spurious <italic>T</italic> fluctuations. Empirical mode decomposition (EMD) can separate HOP data into a set of adaptive and unique intrinsic mode functions (IMFs), often with physical meaning. DEMD aims to correct for spurious contributions to HOP data, while merging EMD with a correlation analysis to adjust data without eliminating relevant ABL dynamics.

To evaluate DEMD efficacy, two-dimensional synthetic <italic>T</italic> fields with simulated turbulence over a prescribed lapse rate are sampled with altitude fluctuations similar to HOP flights, and with a wide range of <italic>T</italic> perturbation and sampling path parameter variations. DEMD recovers the prescribed lapse rate within 1% on average for the 552 test cases passing the filtering criteria. The method is further evaluated via application to vertical cross sections taken from the Ocean-Land-Atmosphere Model (OLAM) large-eddy simulation (LES) results, where DEMD shows improved accuracy of SH recovery.

DEMD is applied to three low-altitude HOP flight legs flown on 19 June 2007 during the Cloud and Land Surface Interaction Campaign (CLASIC), both as an example of practical application and to compare DEMD to the initially proposed method (Holder et al. 2011, hereafter H11). H11 dictates the elimination of correlated IMFs, along with other subtle differences from DEMD, which also eliminates any ABL motions embedded in those IMFs. As suspected, the H11 method produces marked reductions of variances and turbulence kinetic energy (TKE) and substantial deviations in SH, LE, and FCO2 compared to DEMD. DEMD detrends without unnecessary elimination.

DEMD is vital for ensuring accurate scalars and fluxes from HOP data, and a strategy for future research is presented that integrates properly detrended observations from the CLASIC HOP dataset with OLAM simulations to explore LSH effects on ABL processes and evaluate blending height theory.