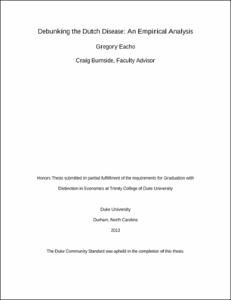 Files
Honors thesis
580.3 Kb
Condensed Data
387.8 Kb
Date
Author
Eacho, Gregory
Repository Usage Stats
768
views
1,461
downloads
Abstract
The prior literature on the phenomenon of the Resource Curse includes the theory of the Dutch disease, in which the resource exporting sector crowds out other exports through the an appreciation of the real exchange rate. This paper attempts to add to this literature by shedding some light on the existence of this mechanism, exploring the relationship between resource booms and the real exchange rate. Using a panel of countries over time, I look at the effect of commodity price indices on countries’ real effective exchange rates, sorting the countries by their resource export-intensiveness and by looking at a panel of countries over time. The findings fail to support the hypothesis of the Dutch disease, as there is little evidence of a statistically significant relationship between a commodity price index change and a real exchange rate change for those countries who were experiencing a boom in that commodity type. Nonetheless, the findings from this paper should be taken with extreme caution, as the regressions were are single-factor and non-causal in nature. Further analysis would be prudent for those interested in deciphering the extent to which this relationship does or does not exist.
Type
Honors thesis
Department
Economics
Subject
Dutch Disease
Permalink
https://hdl.handle.net/10161/8180
Citation
Eacho, Gregory (2013). Debunking the Dutch Disease: an Empirical Analysis. Honors thesis, Duke University. Retrieved from https://hdl.handle.net/10161/8180.
Collections
More Info
Show full item record