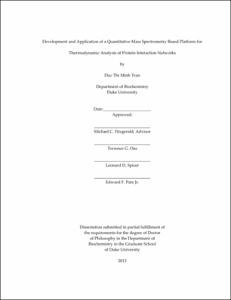 The methodologies and protocols developed and applied in this work are all related to the Stability of Unpurified Proteins from Rates of amide H/D Exchange (SUPREX) and Stability of Protein from Rates of Oxidation (SPROX) techniques, which have been previously established for the thermodynamic analysis of protein folding reactions and protein-ligand binding interactions. The work in this thesis is comprised of four parts. Part I involves the development of a Histidine Slow H/D exchange protocol to facility SURPEX-like measurements on the proteomic scale. The Histidine Slow H/D exchange protocol is developed in the context of selected model protein systems and used to investigate the thermodynamic properties of proteins in a yeast cell lysate.

In Part II an isobaric mass tagging strategy is used in combination with SPROX (i.e., a so-called iTRAQ-SPROX protocol) is used to characterize the altered protein interactions networks associated with lung cancer. This work involved differential thermodynamic analyses on the proteins in two different cell lines, including ADLC-5M2 and ADLC-5M2-C2.

Parts III and IV of this thesis describe the development and application of a SPROX protocol for proteome-wide thermodynamic analyses that involves the use of Stable Isotope Labeling by Amino acid in cell Culture (SILAC) quantitation. A solution-based SILAC-SPROX protocol is described in Part III and a SILAC-SPROX protocol involving the use of cyanogen bromide and a gel-based fractionation step is described in Part IV. The SILAC-SPROX-Cyanogen bromide (SILAC-SPROX-CnBr) protocol is demonstrated to significantly improve the peptide and protein coverage in proteome-wide SPROX experiments. Both the SILAC-SPROX and SILAC-SPROX-CnBr porotocols were used to characterize the ATP binding properties of yeast proteins. Ultimately, the two protocols enabled 526 yeast proteins to be assayed for binding to AMP-PNP, an ATP mimic. A total of 140 proteins, including 37 known ATP-binding proteins, were found to have ATP binding interactions.