The Neurobiology of Social Cognition: Role of the Posterior Cingulate Cortex 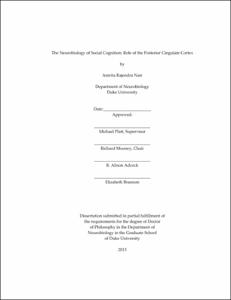 It has been suggested that primate brains are inherently biased towards gathering and processing the social information present in the world. In fact, the neural network that mediates our engagement with the external world - the default mode network (DMN) ¬- is strongly convergent with the neural circuitry for social cognition. The posterior cingulate (PCC) is believed to be a key node in both the DMN and in social cognition. Human and non-human primate studies have demonstrated a role for the PCC in outcome monitoring: it tracks rewards, subjective values of choices, task engagement and global choice strategies. It is also implicated in social cognition. Human studies show that PCC activity varies with the recall of autobiographical memories and exposure to social stimuli. While several electrophysiological studies explicate the response of PCC neurons to non-social outcome monitoring and valuation, there is a lack of similar studies for social valuation. This thesis is concerned with characterizing the neuronal responses in the PCC to social stimuli and determining whether social valuation occurs in the PCC in a manner similar to that previously described for non-social outcomes. I recorded the single unit activity of neurons in the PCC of rhesus macaques while they performed behavioral tasks that required attending to the faces of high-status or low-status individuals. Monkeys valued the faces of high-status individuals more than low-status individuals, though they were equally likely to identity and overtly attend to faces of both social classes. This differential valuation of face stimuli was represented in the firing activity of PCC neurons, with higher neuronal activity seen in response to subordinate faces as compared to dominant ones. Cells in the PCC did not track the individual identity of the presented faces. Furthermore, neuronal activity in the PCC predominantly tracked social value, and not non-social reward delivery as previously reported. Neuronal activity also predicted task engagement, with higher firing rates being predictive of a decrease in task engagement. To summarize, the PCC is biased towards social information processing, and neuronal activity in the PCC tracks social category information and the level of task engagement.