Democritus and the Critical Tradition 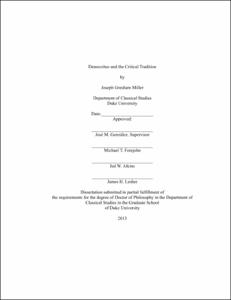 Modern scholars cannot agree how extant fragments of thought attributed to Leucippus and Democritus integrate (or do not) to form a coherent perspective on the ancient Greek world. While a certain degree of uncertainty is unavoidable, given the nature of the evidence available and the fact that Democritus wrote many different works (including at least one in which he deliberately argued against positions that he defended elsewhere), this study demonstrates that we know enough to take a more integrative view of the early atomists (and of Democritus in particular) than is usually taken. In the case of Democritus, this study shows that it makes good sense to read what remains of his works (physical, biological, and ethical) under the presumption that he assumes a single basic outlook on the world, a coherent perspective that informed every position taken by the atomist philosopher.

Chapter 1 provides an in-depth portrait of the historical and philosophical context in which early atomism was born. As part of this portrait, it offers thumbnail sketches of the doctrines attributed to a representative catalogue of pre-Socratic philosophers to whom published work is attributed (Anaximander, Xenophanes, Heraclitus, Parmenides, Empedocles, Anaxagoras, Philolaus). It demonstrates how each philosopher presumes that his theory offers a universal outlook on human reality, a perspective on the universe which purposely encompasses (and builds into a single theoretical framework) physics and biology and practical ethics.

Chapter 2 introduces the early atomists as respondents to the pre-Socratic movement before them (a movement which this study refers to as the Critical Tradition). It presents evidence for an integrated reading of early atomist fragments, a reading that construes the Leucippus and Democritus as men of their time (working with and responding to the positions taken by their predecessors in the Critical Tradition).

Chapter 3 shows how Democritus' ethics arise naturally from his physics via an historical process of development. Like his predecessors in the Critical Tradition and many of his contemporaries, the atomist deliberately imagines nature (physics) providing the raw material from which culture (ethics) naturally and inevitably rises.

Chapter 4 offers an original reading of extant ethical fragments of Democritus, showing how the atomist uses his unique outlook on the world to develop a practical approach to living well.