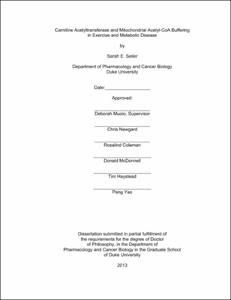 Acetyl-CoA holds a prominent position as the common metabolic intermediate of glucose, amino acid and fatty acid oxidation. Because acetyl-CoA fuels the tricarboxylic acid (TCA) cycle, the primary source of reducing equivalents that drives mitochondrial oxidative phosphorylation, understanding acetyl-CoA pool regulation becomes imperative to understanding mitochondrial energetics. Carnitine acetyltransferase (CrAT), a muscle-enriched mitochondrial enzyme, catalyzes the freely reversible conversion of acetyl-CoA to its membrane permeant carnitine ester, acetylcarnitine. Because CrAT has long been thought to regulate the acetyl-CoA metabolite pool, we investigated the role of CrAT in acetyl-CoA regulation. Although the biochemistry and enzymology of the CrAT reaction has been well studied, its physiological role remains unknown. Investigations herein suggest that CrAT-mediated maintenance of the mitochondrial acetyl-CoA pool is imperative for preservation of energy homeostasis. We provide compelling evidence that CrAT is critical for fine-tuning acetyl-CoA balance during the fasted to fed transition and during exercise. These studies suggest that compromised CrAT activity results in derangements in mitochondrial homeostasis.

In chapter 3, we examined the effects of obesity and lipid exposure on CrAT activity. Recent studies have shown that acetyl-CoA-mediated inhibition of pyruvate dehydrogenase (PDH), the committed step in glucose oxidation, is modulated by the CrAT enzyme. Because PDH and glucose oxidation are negatively regulated by high fat feeding and obesity, we reasoned that nutritional conditions that promote lipid availability and fat oxidation might likewise compromise CrAT activity. We report an accumulation of long chain acylcarnitines and acyl-CoAs but a decline in the acetylcarnitine/acetyl-CoA ratio in obese and diabetic rodents. This reduction in the skeletal muscle acetylcarnitine/acetyl-CoA ratio was accompanied by a decrease in CrAT specific activity, despite increased protein abundance. Exposure to long chain acyl-CoAs in vitro demonstrated that palmitoyl-CoA acts as a mixed model inhibitor of CrAT. Furthermore, primary human skeletal muscle myocytes exposed to fatty acid and or CPT1b overexpression had elevated long chain acylcarnitines but decreased production and efflux of CrAT-derived short chain acylcarnitines. These data suggest that exposure to fatty acids in obesity and diabetes can counter-regulate the CrAT enzyme leading to decreased activity.

Alternatively, chapter 4 addresses the importance of acetyl-CoA buffering during exercise and suggests that a deficit in CrAT activity leads to fatigue. Because CrAT is highly expressed in tissues specifically designed for work and because acetylcarnitine, the primary product of the CrAT reaction, is increased during contraction, we reasoned that CrAT could play an important role in exercise. To investigate this possibility, we employed exercise intervention and ex-vivo analysis on a genetically novel mouse model of skeletal muscle CrAT deficiency (CrATSM-/-). Though resting acetyl-CoA levels were elevated in CrATSM-/- mice, these levels dropped significantly after intense exercise while acetylcarnitine content followed the opposite pattern. This contraction-induced acetyl-CoA deficit in CrATSM-/- mice was coupled with compromised performance and diminished whole body glucose oxidation during high intensity exercise. These results imply that working muscles clear and consume acetylcarnitine in order to maintain acetyl-CoA buffering during exercise. Importantly, provision of acetylcarnitine enhanced force generation, delayed fatigue and improved mitochondrial energetics in muscles from CrATfl/fl controls but not CrATSM-/- littermates, emphasizing the importance of acetyl-CoA maintenance. In aggregate, these data demonstrate a critical role for CrAT-mediated acetyl-CoA buffering in exercise tolerance and suggest its involvement in energy metabolism during skeletal muscle contraction and fatigue. These findings could have important clinical implications for individuals with muscle weakness and fatigue due to multiple conditions, such as peripheral vascular or cardiometabolic disease.

In summary, data herein emphasize the role of CrAT in regulation of mitochondrial acetyl-CoA pool. We demonstrate that CrAT is critical for fine-tuning acetyl-CoA balance both during the fasted to fed transition and during exercise. These data suggest that a deficit in CrAT activity leads to glucose intolerance and exercise fatigue. We examine these studies and suggest future areas of study.