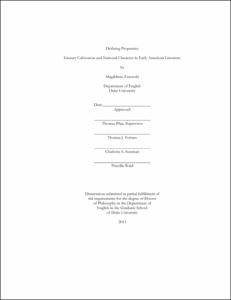 In the decades following the English Civil War, as the Anglophone world began transitioning to a social order structured by market and finance capitalism, the word cultivation, which earlier had referred exclusively to agricultural processes, acquired increasingly figurative meanings referring to the development of an individual's mind, faculties, and manners. This augmentation of meaning reflected the development of new conceptions of property as an essential feature of personhood that had begun to alter the definition of subjectivity. The circulation of such figurative meanings coincides with the rise of print culture, the development of a literary public sphere, and the professionalization of writing in the eighteenth century. These cultural developments suggest the relative ease with which the new conception of property expressed as literary personality coexisted alongside other forms of capital in Britain. Literary criticism of the last forty years, including the work of Raymond Williams, Clifford Siskin, Jerome Christensen, and Thomas Pfau, has accounted for the many ways in which possessing literary cultivation served the development of a middle-class economy and ideology in eighteenth-and-nineteenth century Britain. Though the figurative meaning of cultivation appears throughout American literature of the long nineteenth century, thus attesting to the concept's transatlantic migration and adaptation to the socio-political climates of the New World, no significant studies of American literature have considered the role literary cultivation itself plays in shaping American ideas of personality. My study begins to facilitate an understanding of how modern definitions of property affected and effected early American literary culture.

By placing American literature of the long nineteenth century in a transatlantic context, I show how five works by De Crevecoeur, Franklin, Equiano, Brockden Brown, and Margaret Fuller model the relationship between real and metaphorical cultivation at the level of both form and narrative content. I argue that within these works literary personality appears as a threat to the American character unless it directly facilitates the acquisition of real property. That in an American context figurative cultivation is at all times subordinated to real cultivation suggests a suspicion of intellectual development at the very foundations of American culture. I draw on new work in early American literature, eighteenth-century studies, British Romanticism, and on a tradition of Marxist critique to read American personality not as an exceptional and isolated development of the revolutionary era, but as a transatlantic migration of cultural forms and conceptions that adapt and mutate upon arriving on New World soil. To understand these migrations and mutations, I map the importation of European aesthetic concepts and literary sources within American productions. My readings make sense of the contradictions within the anti-literary American ideology often articulated in the content of works, whose forms nevertheless reveal a comprehensive engagement with literary history. Doing so allows me to demonstrate the complex ways in which early American authors depicted literary cultivation as either a means of acquiring real property or as a moral redress against the self interest of a speculative economic culture.