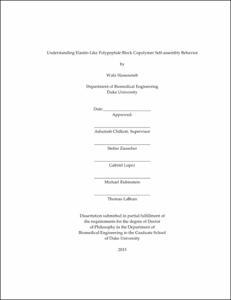 Elastin-like polypeptides (ELPs) are thermally responsive polymers composed of the pentapeptide repeat Valine-Proline-Glycine-X-Glycine where X is any amino acid except proline. ELP diblocks have been engineered by creating two ELP blocks with hydrophilic and hydrophobic guest residues. The hydrophobic block desolvates at a lower temperature and forms the core of a micelle while the still hydrated hydrophilic block forms the corona. ELP micelles are promising drug delivery vehicles for cancer therapeutics. ELP diblocks offer a unique method to display targeting proteins multivalently on micelles to improve tumor cell uptake. As ELPs are genetically encoded, proteins can be seamlessly fused at the genetic level to the ELP diblock. The protein ELP diblock fusions can be synthesized as one polypeptide chain that is of precise molecular weight and highly monodisperse, and no post-synthesis modification is necessary. Self-assembly behavior of ELP diblocks is known to tolerate fusion to small peptides (< 10 amino acids) but their self-assembly behavior has not be examined when fused to proteins that are 100-200 amino acids. Here, we hypothesize that molecular weight of the protein and the surface properties of the protein will be factors in determining its effect on ELP diblock self-assembly. In addition, the ELP block lengths and composition are hypothesized to be factors in the self-assembly behavior of protein ELP diblock fusions. This hypothesis is tested by fusing four proteins with different properties to various ELP diblocks and characterizing their self-assembly behavior. The proteins were found to dominate the self-assembly behavior. Proteins that disrupted self-assembly did so for all ELP diblock lengths and compositions. Protein that did not disrupt self-assembly behavior affected the thermal behavior of the hydrophilic block. Hydrophilic proteins increased the micelle-to-aggregate transition temperature while hydrophobic proteins decreased it. We also sought to understand the self-assembly of ELP diblocks on a theoretical basis. A previously developed model for the self-assembly of synthetic polymers was applied to our polypeptide system. Two parameters, solvent quality of the corona and surface tension of the hydrophobic block, were experimentally measured and used to fit the model. Predictions of micelle radius and aggregation numbers were in good agreement with experimental data. However, the corona was found to be unstretched compared to its Gaussian size by this model. Therefore, a new model was developed describing what is termed as weak micelles in which the corona is not stretched but rather close to Gaussian size. The weak micelle model prediction were also in good agreement with experimental data suggesting that ELP micelles are in the crossover regime between the previous model and the new model.