Plastic Recognition: The Politics and Aesthetics of Facial Representation from Silent Cinema to Cognitive Neuroscience 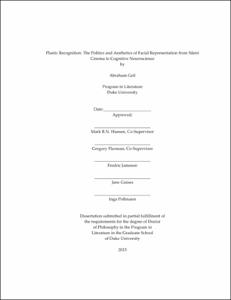 Plastic Recognition traces a critical genealogy of the human face in cinema and its afterlives. By rethinking the history of film theory through its various investments in the face, it seeks to intervene not only in the discipline of film studies but more broadly within contemporary political and scientific discourse. This dissertation contends that the face is a privileged site for thinking through the question of recognition, a concept that cuts across a range of aesthetic, political, philosophical, and scientific thought. Plastic Recognition examines this intimate link between the face and recognition through a return to "classical" film theory, and specifically to the first generation of European and Soviet film theorists' preoccupation with the face in silent cinema. In the process, it recasts the canonical debate over cinematic specificity between Béla Balázs and Sergei Eisenstein as an antagonism between two opposing conceptions of the face in film: transparent universalism versus plastic typicality. Of these two conceptions, this project contends that the "Balázsian" idea of a transparently expressive face assumes cultural dominance in the latter half of the 20th century by virtue of its essential commensurability with the political and social ideal of mutual recognition that has come to prevail in the United States and Western Europe in the context of neoliberalism. Alongside and against this dominant tendency, the "Eisensteinian" insistence upon the plasticity of aesthetic form provides a radical alternative to the idealist metaphysics of immediacy underlying both the "Balázsian" notion of the cinematic face and the ideal of mutual recognition it exemplifies. That insistence forces into view the ways that recognition itself is always contingent upon aesthetic and technological practices, even (or especially) when it is brokered by that seemingly most immediate of images--the human face. By adopting this approach as its basic critical orientation, this dissertation attempts to restage the problem of recognition as fundamentally about the historicity of plastic form. The project concludes by turning to a scientific scene of recognition in which the "Balázsian" conception of the face makes an uncanny reappearance. The final chapter examines several studies in contemporary neuroscience that use representations of the human face as experimental stimuli in an effort to establish a neurophysiological basis for the mutual recognition of empathy.