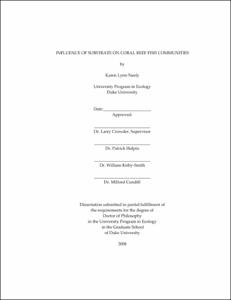 Coral reef fish coexist in a state of high diversity that has not been successfully explained by niche diversification, larval supply, differential mortality, or a suite of other proposed factors. These processes are all occurring on a diverse substrate that would be expected to affect the abundance and distribution of fish by directing habitat preferences as well as affecting competitive and predatory success. I conducted correlational studies on healthy and degraded Caribbean reefs that addressed fish abundances at the levels of community, species, and age class. I also experimentally tested habitat preferences in two ways: choice experiments on adults of common species that determined preferences for live coral and rugosity in an isolated environment, and monitoring of artificial reefs differing in live coral cover that tested habitat selection of adults and juveniles in the field. These observations all show that live coral had no effect on community parameters such as abundance or diversity, but that rugosity was positively related to species richness. However, these measures of the community masked differences at the species and age class level. A handful of species exhibited positive or negative preferences for live coral, but these selections did not follow a taxonomic or trophic-level classification. Species within the genus Stegastes, for example, could either aggregate towards or avoid live coral. One species even reversed its habitat preference as it matured. Field distributions were not determined solely by these habitat preferences, but inclusion of competitive interactions into a multi-factorial model explained distribution of some species. Results suggest that changes in live coral cover, an increasingly common phenomenon, would not affect fish at a community level, but could affect a few species through changes to recruitment or alteration of competitive interactions.