The Bi-directional Spatial Spectrum for MIMO Radar and Its Applications 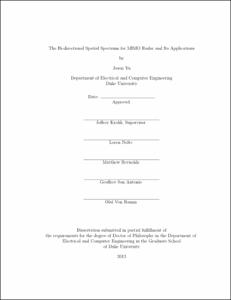 Radar systems have long applied electronically-steered phased arrays to discriminate returns in azimuth angle and elevation angle. On receiver arrays, beamforming is performed after reception of the data, allowing for many adaptive array processing algorithms to be employed. However, on transmitter arrays, up until recently pre-determined phase shifts had to applied to each transmitter element before transmission, precluding adaptive transmit array processing schemes. Recent advances in multiple-input multiple-output radar techniques have allowed for transmitter channels to separated after data reception, allowing for virtual non-causal "after-the-fact" transmit beamforming. The ability to discriminate in both direction-of-arrival and direction-of-departure allows for the novel ability to discriminate line-of-sight returns from multipath returns. This works extends the concept of virtual non-causal transmit beamforming to the broader concept of a bi-directional spatial spectrum, and describes application of such a spectrum to applications such as spread-Doppler multipath clutter mitigation in ground-vehicle radar, and calibration of a receiver array of a MIMO system with ground clutter only. Additionally, for this work, a low-power MIMO radar testbed was developed for lab testing of MIMO radar concepts.