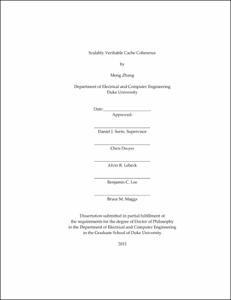 We, as architects, believe that we can alleviate the verification problem by changing the traditional design paradigm. We suggest taking verifiability as a first-class design constraint, just as we do with other traditional metrics, such as performance, power consumption, and area overhead. To do this, we need to incorporate verification effort in the early design stage of a cache coherence protocol and make wise design decisions regarding the verifiability. Such a protocol will be amenable to verification and easier to be verified in a later stage. Specifically, we propose two methods in this thesis for designing scalably verifiable cache coherence protocols.

As system expands and cache coherence protocols get more complex, the verification problem of the protocol becomes more prominent. We believe it is time to reconsider the traditional design flow in which verification is totally separated from the design stage. We show that by incorporating the verifiability in the early design stage and designing protocols to be scalably verifiable in the first place, we can greatly reduce the burden of verification. Meanwhile, we perform various experiments and show that we do not lose benefits in performance as well as in other metrics when we obtain the correctness guarantee.