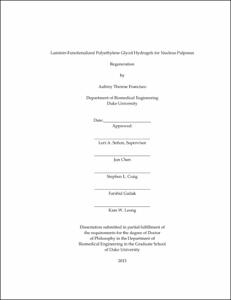 Intervertebral disc (IVD) disorders and age-related degeneration are believed to contribute to low back pain. There is significant interest in cell-based strategies for regenerating the nucleus pulposus (NP) region of the disc; however, few scaffolds have been evaluated for their ability to promote or maintain an immature NP cell phenotype. Additionally, while cell delivery to the pathological IVD has significant therapeutic potential for enhancing NP regeneration, the development of injectable biomaterials that retain delivered cells, promote cell survival, and maintain or promote an NP cell phenotype in vivo remains a significant challenge. Previous studies have demonstrated NP cell - laminin interactions in the NP region of the IVD that promote cell attachment and biosynthesis. These findings suggest that incorporating laminin ligands into biomaterial scaffolds for NP tissue engineering or cell delivery to the disc may be beneficial for promoting NP cell survival and phenotype. In this dissertation, laminin-111 (LM111) functionalized poly(ethylene glycol) (PEG) hydrogels were developed and evaluated as biomaterial scaffolds for cell-based NP regeneration.

Here, PEG-LM111 conjugates with functional acrylate groups for crosslinking were synthesized and characterized to allow for protein coupling to both photocrosslinkable and injectable PEG-based biomaterial scaffolds. PEG-LM111 conjugates synthesized using low ratios of PEG to LM111 were found support NP cell attachment and signaling in a manner similar to unmodified LM111. A single PEG-LM111 conjugate was conjugated to photocrosslinkable PEG-LM111 hydrogels, and studies were performed to evaluate the effects of hydrogel formulation on immature NP cell phenotype in vitro. When primary immature porcine NP cells were seeded onto PEG-LM111 hydrogels of varying stiffnesses, softer LM111 presenting hydrogels were found to promote cell clustering and increased levels of sGAG production as compared to stiffer LM111 presenting and PEG-only gels. When cells were encapsulated in 3D gels, hydrogel formulation was found to influence NP cell metabolism and expression of proposed NP phenotypic markers, with higher expression of N-cadherin and cytokeratin 8 observed for cells cultured in softer (<1 kPa) PEG-LM111 hydrogels.

A novel, injectable PEG-LM111 hydrogel was developed as a biomaterial carrier for cell delivery to the IVD. PEG-LM111 conjugates were crosslinked via a Michael-type addition reaction upon the addition of PEG-octoacrylate and PEG-dithiol. Injectable PEG-LM111 hydrogel gelation time, mechanical properties, and ability to retain delivered cells in the IVD space were evaluated. Gelation occurred in approximately 20 minutes without an initiator, with dynamic shear moduli in the range of 0.9 - 1.4 kPa. Primary NP cell retention in cultured IVD explants was significantly higher over 14 days when cells were delivered within a PEG-LM111 hydrogel carrier, as compared to cells in liquid suspension.

The studies presented in this dissertation demonstrate that soft, LM111 functionalized hydrogels may promote or maintain the expression of specific markers and cell-cell interactions characteristic of an immature NP cell phenotype. Furthermore, these findings suggest that this novel, injectable laminin-functionalized biomaterial may be an easy to use and biocompatible carrier for delivering cells to the IVD.