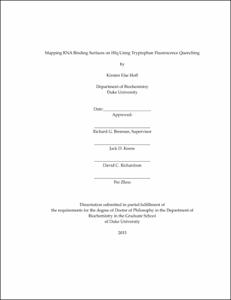 Hfq is a pleiotropic posttranscriptional regulator and RNA chaperone that facilitates annealing of trans-encoded sRNA/mRNA pairs. It regulates many different cellular pathways including environmental stress responses, quorum sensing, virulence and maintenance of membrane integrity. Hfq is a member of the Sm/LSm family and forms a homohexamer that has two faces, termed proximal and distal. Hfq preferentially binds A/U rich regions that are near stem loop structures. Crystal structures have shown that poly-A sequences tend to bind the distal face while poly-U sequences bind the proximal face. Currently crystal structures reveal the binding mechanisms for short RNA sequences however; physiologically relevant RNA sequences are typically longer and more structured. To study how these more complex RNA sequences interact with Hfq, a tryptophan fluorescence quenching (TFQ) assay has been developed. Here it is presented that TFQ can correctly identify the binding face for two control sequences, A15 and U6, using the E. coli, S. aureus and L. monocytogenes Hfq homologues. Using fluorescence anisotropy and crystallography it is observed that Trp mutants necessary for TFQ may affect binding to some degree but do not affect the overall structure or RNA binding function of Hfq. TFQ is then used to examine the distal face binding motifs for both Gram-negative (E. coli) and Gram-positive (S. aureus/L. monocytogenes) Hfq, (A-R-N)n and (R-L)n respectively. Using sequences that either fulfilled just (A-R-N)n or both (A-R-N)n and (A-A-N)n motifs it is shown that the distal face motif for Gram-negative Hfq is the more specific (A-A-N)n motif. Using sequences that either fulfilled just (R-L)n or both (R-L)n and (A-L)n motifs it is shown that the Gram-positive distal face motif can be redefined to the (A-L)n motif. Finally TFQ is used to explore autoregulation of E. coli hfq. Two identified binding sites located in the 5'UTR of hfq mRNA, site A and site B, were used for TFQ, along with a longer RNA sequence that contains both sites and their native linker, 5' UTR. TFQ illustrates that the individual sites and the 5' UTR are capable of binding both faces. Each site appears to prefer binding to one face over the other, suggesting a model for hfq 5' UTR mRNA binding to Hfq where either one or two hfq mRNA bind a single Hfq hexamer. In conclusion, TFQ is a straightforward method for analyzing how RNA sequences interact with Hfq that can be utilized to study how longer, physiologically relevant RNA sequences bind Hfq.