Theory and design of nonlinear metamaterials 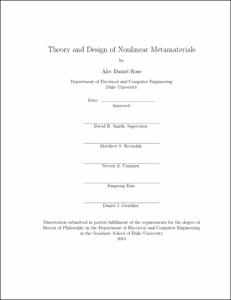 If electronics are ever to be completely replaced by optics, a significant possibility in the wake of the fiber revolution, it is likely that nonlinear materials will play a central and enabling role. Indeed, nonlinear optics is the study of the mechanisms through which light can change the nature and properties of matter and, as a corollary, how one beam or color of light can manipulate another or even itself within such a material. However, of the many barriers preventing such a lofty goal, the narrow and limited range of properties supported by nonlinear materials, and natural materials in general, stands at the forefront. Many industries have turned instead to artificial and composite materials, with homogenizable metamaterials representing a recent extension of such composites into the electromagnetic domain. In particular, the inclusion of nonlinear elements has caused metamaterials research to spill over into the field of nonlinear optics. Through careful design of their constituent elements, nonlinear metamaterials are capable of supporting an unprecedented range of interactions, promising nonlinear devices of novel design and scale. In this context, I cast the basic properties of nonlinear metamaterials in the conventional formalism of nonlinear optics. Using alternately transfer matrices and coupled mode theory, I develop two complementary methods for characterizing and designing metamaterials with arbitrary nonlinear properties. Subsequently, I apply these methods in numerical studies of several canonical metamaterials, demonstrating enhanced electric and magnetic nonlinearities, as well as predicting the existence of nonlinear magnetoelectric and off-diagonal nonlinear tensors. I then introduce simultaneous design of the linear and nonlinear properties in the context of phase matching, outlining five different metamaterial phase matching methods, with special emphasis on the phase matching of counter propagating waves in mirrorless parametric amplifiers and oscillators. By applying this set of tools and knowledge to microwave metamaterials, I experimentally confirm several novel nonlinear phenomena. Most notably, I construct a backward wave nonlinear medium from varactor-loaded split ring resonators loaded in a rectangular waveguide, capable of generating second-harmonic opposite to conventional nonlinear materials with a conversion efficiency as high as 1.5\%. In addition, I confirm nonlinear magnetoelectric coupling in two dual gap varactor-loaded split ring resonator metamaterials through measurement of the amplitude and phase of the second-harmonic generated in the forward and backward directions from a thin slab. I then use the presence of simultaneous nonlinearities in such metamaterials to observe nonlinear interference, manifest as unidirectional difference frequency generation with contrasts of 6 and 12 dB in the forward and backward directions, respectively. Finally, I apply these principles and intuition to several plasmonic platforms with the goal of achieving similar enhancements and configurations at optical frequencies. Using the example of fluorescence enhancement in optical patch antennas, I develop a semi-classical numerical model for the calculation of field-induced enhancements to both excitation and spontaneous emission rates of an embedded fluorophore, showing qualitative agreement with experimental results, with enhancement factors of more than 30,000. Throughout these series of works, I emphasize the indispensability of effective design and retrieval tools in understanding and optimizing both metamaterials and plasmonic systems. Ultimately, when weighed against the disadvantages in fabrication and optical losses, the results presented here provide a context for the application of nonlinear metamaterials within three distinct areas where a competitive advantage over conventional materials might be obtained: fundamental science demonstrations, linear and nonlinear anisotropy engineering, and extremely compact resonant all-optical devices.