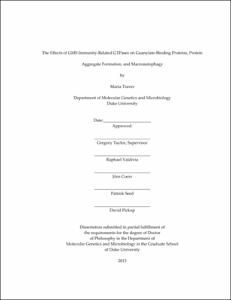 The Immunity-Related GTPases (IRGs) are a family of dynamin-like proteins found in vertebrates that play critical roles in cell-autonomous resistance to bacteria and protozoa. The IRGs are divided into two subfamilies, with the GMS IRGs exerting a regulatory function over the GKS IRGs, affecting GKS IRG expression, localization, and ultimately function. The profound loss of host resistance seen in mice lacking the GMS protein Irgm1 suggests that GMS IRGs may additionally have broader functions beyond the regulation of GKS IRGs, though the nature of these functions remains poorly understood. In this dissertation, we address the regulatory functions of GMS IRGs in mouse cells.

We first addressed regulation of GKS IRGs (Irga6 and Irgb6) by GMS IRGs (Irgm1 and Irgm3). We found that in both fibroblasts and macrophages lacking these GMS IRGs, that the GKS IRGs relocalized to form punctate structures that were ubiquitin-, p62-, and LC3-positive. A biochemical analysis indicated that the GKS IRGs were directly ubiquitinated through K63 linkages. Collectively, these results suggested that GMS IRGs regulate aggregation of GKS IRGs and their transfer to autophagosomes through one of at least two possible mechanisms -- by the direct association of GMS IRGs with GKS IRGs to block their aggregation that subsequently leads to autophagic removal, and/or by directly promoting autophagic removal of spontaneously forming GKS aggregates. The latter hypothesis was addressed using a series of complementary assays, which ultimately showed that absence of Irgm1 has no effect on the maturation of autophagosomes in fibroblasts, and only a very small and statistically insignificant effect in macrophages. Thus, we conclude that the major mechanism through which GMS IRGs regulate GKS IRGs is by directly inhibiting their aggregation, rather than through general effects on autophagic initiation or maturation of GKS IRG-containing autophagosomes.

We also addressed the possibility of broad regulatory functions of GMS IRGs beyond the regulation of GKS IRGs by examining whether GMS IRGs can affect another family of dynamin-like GTPases, the guanylate-binding proteins (GBPs). Despite no previous evidence of interactions between these two protein families, we found that the absence of GMS IRGs had striking effects on the localization of the murine Gbp2, leading it to colocalize with GKS IRG aggregates formed as a consequence of GMS IRG deficiency. We further demonstrated that unlike the GKS IRGs, Gbp2 was not tagged with K63-linked ubiquitin chains, which might have targeted it for specific macroautophagy, implying that Gbp2 is not aggregating in the absence of Irgm1. We then showed both that Gbp2 forms puncta in the presence of generic protein aggregates, and that guanylate-binding proteins including Gbp2 promote the degradation of GKS IRG protein aggregates. These findings suggest that GMS IRGs do not exert direct control over GBPs, but rather that GBPs are involved in the macroautophagic degradation of protein aggregates as a primary function, and are thus influenced indirectly by GMS IRGs.

In total, our experiments contribute to the understanding of regulatory interactions among GMS IRGs, GKS IRGs, and GBPs. These results will be important in establishing the mechanisms through which these important families of proteins influence eradication of bacterial and protozoan pathogens through key innate immune mechanisms.