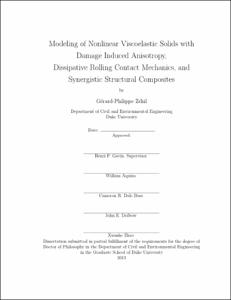 The main objectives of this research are: (i) to elaborate a unified nonlinear viscoelastic model for rubber-like materials, in finite strain, accounting for material softening under deformation, and for damage induced anisotropy, (ii) to conceive, implement and test, simple, robust and efficient frictional rolling and sliding contact algorithms, in steady-state, as alternatives to existing, general purpose, contact solving strategies, (iii) to develop and verify high fidelity and computationally efficient modeling tools for isotropic and anisotropic viscoelastic objects in steady-state motion, (iv) to investigate, numerically and through experimentation, the influence of various material parameters, including material nonlinearities such at the Payne effect and the Mullins effect, as well as geometric parameters and contact surface conditions, on viscoelastic rolling resistance, and (iv) to explore, analytically and through experimentation, the conditions under which favorable mechanical synergies occur between material components and develop novel composites with improved structural performances.

A new constitutive model that unifies the behavioral characterizations of rubber-like materials in a broad range of loading regimes is proposed. The model reflects two fundamental aspects of rubber behavior in finite strain: (i) the Mullins effect, and (ii) hyper-viscoelasticity with multiple time scales, including at high strain rates. Suitable means of identifying the system's parameters from simple uniaxial extension tests are explored. A directional approach extending the model to handle softening induced anisotropy is also discussed.

Novel, simple, and yet robust and efficient algorithms for solving steady-state, frictional, rolling/sliding contact problems, in two and three dimensions are presented. These are alternatives to powerful, well established, but in particular instances, possibly `cumbersome' general-purpose numerical techniques, such as finite-element approaches based on constrained optimization. The proposed algorithms are applied to the rolling resistance of cylinders and spheres.

Two and three-dimensional boundary element formulations of isotropic, transversely isotropic, and fully orthotropic, compressible and incompressible, viscoelastic layers of finite thickness are presented, in a moving frame of reference. The proposed formulations are based on two-dimensional Fourier series expansions of relevant mechanical fields in the continuum of the layers and support any linear viscoelastic material model characterized by general frequency-domain master-curves. These modeling techniques result in a compliance matrix for the upper boundary of the layers, including the effects of steady-state motion. Such characterizations may be used as components in various problem settings to generate sequences of high fidelity solutions for varying parameters. These are applied, in combination with appropriate contact solvers, to the rolling resistance of rigid cylinders and spheres.

The problem of a viscoelastic sphere moving across a rigid surface is significantly more complicated than that of a rigid indenter on a viscoelastic plane. The additional difficulties raised by the former may explain why previous work on this topic is so sparse. A new boundary element formulation for the multi-layered viscoelastic coating of a rigid sphere is developed. The model relies on the assumption of a relatively small contact surface in order to decouple equilibrium equations in the frequency domain. It is applied in combination with an adapted rolling contact solving strategy to the rolling resistance of a coated sphere.

New modeling approaches yielding rolling resistance estimates for rigid spheres (and cylinders) on viscoelastic layers of finite thicknesses are also introduced, as lower-cost alternatives to more comprehensive solution-finding strategies, including those proposed in this work. Application examples illustrate the capabilities of the different approaches over their respective ranges of validity.

The computational tools proposed in this dissertation are verified by comparison to dynamic finite element simulations and to existing solutions in limiting cases. The dependencies of rolling resistance on problem parameters are explored. It is for instance shown that, on orthotropic layers, the dissipated power varies with the direction of motion, which suggests new ways of optimizing the level of damping in various engineering applications of very high impact. Interesting lateral viscoelastic effects resulting from material asymmetry are unveiled. These phenomena could be harnessed to achieve smooth and `invisible' guides across three-dimensional viscoelastic surfaces, and hence suggest new ways of controlling trajectories, with a broad range of potential applications.

A new experimental apparatus is designed and assembled to measure viscoelastic rolling resistance. Experiments are conducted by rolling steel balls between sheets of rubber. Principal sources of measurement error, specific to the device, are discussed. Rolling resistance predictions are obtained using the computational tools presented in this dissertation, and compared to the measurements. Interesting conclusions are drawn regarding the fundamental influence of the Payne effect on viscoelastic rolling friction.

The work presented in this dissertations finally touches on the mechanical behavior of casing-infill composite tubes, as potential new lightweight structural elements. The axial behavior of composite circular tubes is addressed analytically. The influence of material parameters and geometry on structural performances are revealed and presented in original graphical forms. It is for instance shown that significantly improved overall stiffness and capacity at yield can be obtained using a moderately soft and highly auxetic infill, which further highlights the need to develop new lightweight auxetic materials, without compromising their stiffness. It is furthermore concluded that limited mechanical synergies can be expected in metal-polymer composite tubes, within the linear range of the materials involved. This prediction is confirmed by a bending experiment conducted on an Aluminum-Urethane composite tube. The experiment however reveals unexpected and quite promising mechanical synergies under large deformations. This novel composite has a potential influence on the design and performance of lightweight protecting structures against shocks and accelerations due to impacts, which justifies that it be characterized further.