The role of TRIM39 in cell cycle and apoptosis 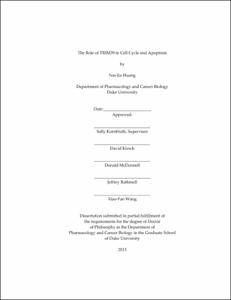 Within individual cells, the opposing processes of proliferation and apoptosis are precisely regulated. When this regulatory balance is interrupted, cells may become abnormal or even transformed. Understanding how to reverse or avoid these detrimental transformative processes begins with an intimate knowledge of the processes governing the cell cycle and apoptosis. Cell proliferation is governed by the cell cycle machinery. The cell cycle is driven by Cyclin-dependent kinase (Cdk) activity, which is dependent on the availability of specific Cyclin binding partners. The amount of available Cyclin is tightly controlled by a ubiquitin ligase protein complex called the anaphase promoting complex/cyclosome (APC/C.) This complex mediates the timely ubiquitylation and degradation of cell cycle regulators in order to control mitotic exit, the G1/S transition and to respond to signals emanating from spindle assembly checkpoint.

Given the importance of the APC/C, cells develop many ways to regulate APC/C activity. Post-translational modifications of the APC/C have been shown to alter its functionality, and many pseudosubstrate-based inhibitors have been discovered. Moreover, inhibitors such as Emi1 and Emi2, have been showed to inhibit the APC/C through their own intrinsic ubiquitin E3 ligase activities. Utilizing the <italic>Xenopus</italic> egg extract system, our laboratory has previously demonstrated that the RING domain-containing ubiquitin E3 ligase Xnf7 can inhibit Xenopus APC/C activity. In the thesis, we have identified TRIM39 as an Xnf7-related human regulator of the APC/C. Our study showed that TRIM39 restrains the ability of the APC/C to ubiquitylate Cyclin B in vitro and attenuates the degradation of Cyclin B and geminin when TRIM39 is incubated in cell lysates. Notably, it has been reported that TRIM39 activity is responsible for the accumulation of the Bax-interacting protein (and activator) MOAP-1 following etoposide-induced DNA damage. Our data indicated that MOAP-1 is a novel APC/C substrate, and that the ligase activity of TRIM39 appears to be essential for preventing its degradation. We further demonstrated that decreased levels of the APC/C activator Cdh1 induces MOAP-1 protein accumulation, thereby promoting DNA damage-induced apoptosis in 293T, PC3 and H1299 cells. This study illustrates a potential function for the APC/C in DNA damage induced apoptosis and also demonstrates that TRIM39 regulates both the cell cycle and apoptosis via APC/C inhibition.

To extend our observations regarding the role for TRIM39 in APC/C regulation, we investigated effects on the cell cycle via real-time imaging microscopy. We found cells arrest at G1/S in TRIM39 depleted RPE cells, a cell line which is commonly used for cell cycle analysis. This arrest phenotype is not observed in 293T, PC3 and H1299 cells which bear mutant p53 alleles. Further analysis showed that TRIM39 depleted RPE cells upregulate many genes that function downstream of p53 activity, such as the cdk inhibitor p21--thus, arresting cells at G1/S and reducing proliferation. The reduced growth can be rescued by p53 knockdown. Mechanistically, TRIM39 interacts with p53 and promotes destruction of p53 by ubiquitylation. This ubiquitylation is independent of the activity of the most intensively studied p53-directed E3 ligase, MDM2; depletion of both MDM2 and TRIM39 has a synergistic effect on p53 accumulation. This elevated p53 leads to more apoptosis in cancer cells bearing wildtype p53. Consequently, TRIM39 depletion might be employed as a combination treatment with MDM2 inhibitor, such as nutlin-3a, to stimulate tumor cell death.

In the thesis, we have found TRIM39 inhibits both the APC/C and p53. Both are essential regulators of cell cycle and apoptosis. Moreover, we have determined that the inhibitory activity of TRIM39 requires its E3 ligase activity. Future experiments will be directed towards investigating how TRIM39 protein stability and ligase activity are regulated to understand more fully the physiological situations in which TRIM39 is able to exert its ability to modulate the cell cycle and apoptosis. I will also discuss some preliminary data regarding changes in TRIM39 ligase activity induced by Chk1 and changes in TRIM39 protein abundance regulated by polo-like kinase 1(Plk1). Chk1 and Plk1 are essential kinases for cell cycle checkpoint and progression. Connecting Chk1 and Plk1 to TRIM39 may provide a more thorough understanding of TRIM39's ability to control the APC/C inhibition and p53 ubiquitylation in response to cell cycle or cell damage cues. Since the APC/C and p53 both can regulate cell cycle and apoptosis, further investigations into the involvement of TRIM39 in the life-or-death decision will be of great interest.